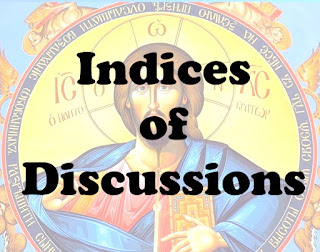 Some "responses" end up being a series of posts, both here and on other blogs.  This page is to index at least some of those discussions.  Several of the links are to opposing viewpoints, it is not to be assumed that just because it is linked here that there is some sort of tacit endorsement of those opposing views.

The 12 Days of Christmas

The history of the Great O Antiphons dates back to as early as the third century (1) as an ancient part of our liturgy.  Boethius, who was around in the late 5th to early 6th century, makes reference to them (2).  The actual existence of the O Antiphons may go back to the earliest days of the Church.  They are part of the Vespers Liturgy of Hours during the octave before the Christ Mass (Christmas) which begins on December 17 and goes through the 23rd.  On December 24th the vespers are for Christmas Eve.


Here are two more interesting notes about these O Antiphons.

The first is not apparent in English, but it can be seen clearly in the official language of the Roman Catholic Church: Latin. The Latin versions of each of the titles of the Messiah are: Sapientia (Wisdom), Adonai (Lord), Radix (Root), Clavis (Key), Oriens (Dawn), Rex (King), and Emmanuel (Emmanuel).  Take the first letters of each of the titles, starting with the last and working back to the first. You spell: EROCRAS or "ero cras... I will be (there) tomorrow".

The song "O Come, O Come, Emmanuel" is simply a reworking of the seven O Antiphons. When you sing it, you are joining yourself to a vast throng of Christians stretching back across centuries and spanning the whole of the earth who prayed as all Christians do, "Come, Lord Jesus!" (Rev 22:20)  (3)

Perhaps the "backwards" acrostic can be related to the earlier language of Hebrew, as it is read from right to left?

According to hymology, the English form of the hymn, which most of us know and sing during Advent, comes to us from an Anglican priest who discovered the medieval antiphons, which were chanted in Latin, and he translated them into English in the mid 19th century.  The melody is actually taken from a funeral rite and the words "Bone iesu, dulcis cunctis" were used.  That funeral rite dates back to the 15th century.  It is also possible that the funeral rite borrowed from the Advent rite which had not been recorded/written or perhaps just not discovered yet - which is quite possible since some of what we know of this hymn has come to light as recent as the 1960's. (4) and (5).

Why Was Luther Wrong?  Eight Parts

James Swan, while not really offering any comment of his own in direct response to this series (thus far) has offered links to previously written materials which I will list here too:

How Accurate Was Exurge Domini in Refuting Martin Luther? (A commentary by James Swan on Hillerbrand's article)

Exurge Domini: An Exercise in Ambiguity From Jimmy Akin (James Swan responds to Jimmy Akin's article allegedly on the subject).

Identifying Infallible Statements (Jimmy Akin's article - the link in Swans page is no longer valid, but this one is.  A quick read of Akin's article shows that it is NOT on the subject we're discussing here.  Akin's article only states that Exurge Domini does not infallibly decide the issue Akin is discussing with a Jehovah's Witness).

Luther on Mary - A Dialog with James Swan:

This discussion started with a challenge from Swan regarding a page on the ACTS Website, I posted the website to this blog for the purpose of researching the citations and making the necessary corrections.

Index of articles in support of the papacy:

Series One Replies To Jason Engwer on the Papacy:


John Bugay and the Donation of Constantine