We are quickly approaching the "Holiday Season" and the little war which breaks out every year, in recent years, where many Christians get upset and even offended over the phrase "Happy Holidays." Many campaign for "Keep Christ in Christmas." 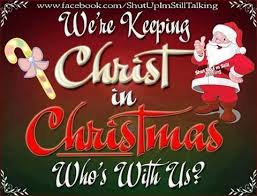 Or how about this one: 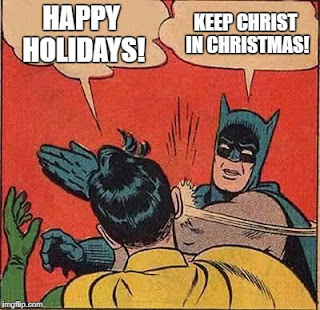 We like to do it a bit differently here on Qui Locutus - and have been doing so for years now.  Here's one of our slogan/meme pics: 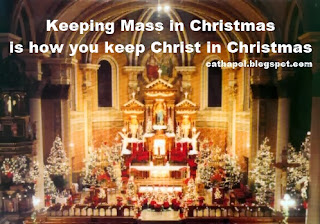 That being said - let's not get offended over "Happy Holidays!"  Afterall, "holiday" really means "holy day" and while it may have been watered down so much in recent years to just mean "a day off" - originally, on Holy Days you WERE given the day off! Why? So you could go to Mass! So, when someone wishes you a "Happy Holiday" or "Happy Holidays" (Christmas, afterall, just STARTS on Christmas Day and runs through at least Epiphany or in some traditions through Candlemas, February 2nd) you should THANK them for respecting that you do celebrate the Holy Days of Christmas... and those of Epiphany and even Candlemas! And let's not forget Advent!  The weeks BEFORE Christmas are the Advent Season, and they too are Holy Days! It is actually MORE appropriate to wish someone "Happy Holidays" during Advent instead of "Merry Christmas," because Christmas has not even begun yet! You could even put a different spin on it and pronounce it, "Happy Holy Days!"


Remember, if you LIKE what you see here, click on one or more of the referral buttons below (Twitter, Facebook, G+, etc.) to help spread the word!
Posted by CathApol on November 19, 2018 No comments:

Pope Francis with Michael Moore and Is Capitalism a Sin? 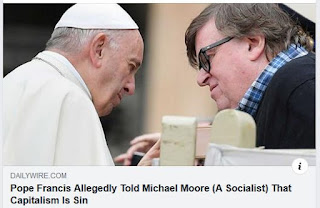 Posted on Facebook, I found this a bit alarming.

Well, when it comes to Michael Moore - you can't really trust anything he has to say and especially what he says other people said to him.  For example, in Fahrenheit 911 he quotes from a couple of local police officers along the Oregon coast, implying they are defending the border there - and they are the only ones for miles and miles (their supervisor explains as well that there are times when NO ONE is out on that stretch of road, see link below). He then points out such a hole in our defense is, well, indefensible. Afterward, the officers were interviewed and explained that Moore asked questions about their duty station, etc. but when it comes to defending the border - well, the Coast Guard is the primary defender of the coastline here! They stated they patrol that lonely stretch of the highway, often alone, and made comments about infrastructure as it relates to the police patrol - but made NO reference to defending the border and/or the Oregon coastline! Again, it is the Coast Guard with the primary responsibility to the defense of the Oregon coast. More here: http://fahrenheit_fact.blogspot.com/2004/07/fahrenheit-fact-no-36-moores.html

IS CAPITALISM A SIN?
In an article from 2011, Dr. Kevin Schmiesing raises the point that we must differentiate between “entrepreneurship, commerce, innovation and technological progress, private property.” and “greed, materialism, cut-throat competition, exploitation of workers.” The former is approved by the Catholic Church and the latter is condemned - yet both can be used to describe Capitalism.  Context is important. https://www.crisismagazine.com/2011/does-the-church-condemn-capitalism


If by capitalism is meant an economic system which recognizes the fundamental and positive role of business, the market, private property and the resulting responsibility for the means of production, as well as free human creativity in the economic sector, then the answer is certainly in the affirmative, even though it would perhaps be more appropriate to speak of a business economy, market economy or simply free economy. But if by capitalism is meant a system in which freedom in the economic sector is not circumscribed within a strong juridical framework which places it at the service of human freedom in its totality, and which sees it as a particular aspect of that freedom, the core of which is ethical and religious, then the reply is certainly negative (Centesimus Annus, No. 42).


In light of these clarifications, we can hear the Pope’s words with greater understanding. He asks, “Do we realize that that system has imposed the mentality of profit at any price, with no concern for social exclusion or the destruction of nature?” He is not speaking here of the market as such, but of a deeply immoral attitude that has seized the hearts of too many who use the market. And he complains, “An unfettered pursuit of money rules. The service of the common good is left behind. Once capital becomes an idol and guides people’s decisions, once greed for money presides over the entire socioeconomic system, it ruins society, it condemns and enslaves men and women.”
These are strong words indeed, but we notice again that the Pope’s attention is not so much on the mechanisms of capitalism, but rather on the wickedness of those who are using the market economy in the wrong way, greedily making an idol of money and becoming indifferent to the needs of others. In his call for an ethical circumscription of economic life, Francis’s language is, if anything, milder than Leo XIII’s (“once the demands of necessity and propriety have been met, the rest that one owns belongs to the poor”) or St. Ambrose’s (“if a man has two shirts in his closet, one belongs to him; the other belongs to the man who has no shirt”).
Therefore, we should attend to Pope Francis’s prophetic speech and allow it to bother us. But we should always situate it in the context of the rich and variegated tradition of Catholic social teaching.
https://www.catholicworldreport.com/2015/07/14/francis-capitalism-and-catholic-social-teaching/

So, the important factor here is to get the persons who are debating Capitalism to define their terms. Certainly PARTS of Capitalism and especially a Capitalism unfettered by morals and restricted by laws to protect labor is condemned by the Catholic Church. The fact is that Catholicism has been involved in basically all forms of economy from dictators to socialists to feudalists and capitalists. While each kind can and does have its criticisms, none all are all bad! When it comes to Michael Moore - he clearly takes people out of context to exploit them and further his atheistic-socialist agenda. Why was he in Rome to see the Pope anyway?

As far as Capitalism is concerned, I believe Charles Dickens sums it up quite nicely in his character of Ebenezer Scrooge in A Christmas Carol.  Some, left to their own devices, will be evil and contemptuous of the poor - but even they can be converted to use Capitalism to do good for society and assist the poor.


"And so, as Tiny Tim observed, God bless Us, Every One!"
(http://www.authorama.com/a-christmas-carol-6.html)