This can be a confusing topic... 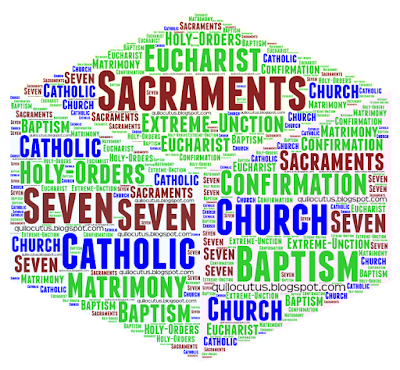 What is a Sacrament?  That's a fairly easy one to define as Catholic theology books and catechisms cover it quite well. One such definition we find in the Baltimore Catechism:


Q. 574. What is a Sacrament?
A. A Sacrament is an outward sign instituted by Christ to give grace.
(Third Plenary Council of Baltimore, Lesson 13, 1891) 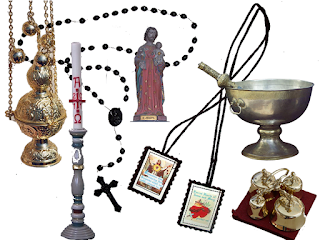 However, when it comes to a Sacramental, the definition is a bit harder to pin down. Using the same source as above, we find:

A. A sacramental is anything set apart or blessed by the Church to excite good thoughts and to increase devotion, and through these movements of the heart to remit venial sin.
(Third Plenary Council of Baltimore, Lesson 27, 1891)


However, the modern Catechism of the Catholic Church gives us this definition:

1667 "Holy Mother Church has, moreover, instituted sacramentals. These are sacred signs which bear a resemblance to the sacraments. They signify effects, particularly of a spiritual nature, which are obtained through the intercession of the Church. By them men are disposed to receive the chief effect of the sacraments, and various occasions in life are rendered holy."
(CCC 1667,  1992)

These are sacred signs which bear a resemblance to the sacraments: they signify effects, particularly of a spiritual kind, which are obtained through the Church's intercession. By them men are disposed to receive the chief effect of the sacraments, and various occasions in life are rendered holy.


And a more traditional view:

The sacramentals were not instituted by Our Lord, like the Sacraments, but by the Church in order to increase our respect for the latter or to give us special favors. The sacramentals do not produce grace by themselves, but they prepare our spiritual dispositions to receive it.
(Fitzgerald, n.d.)


We can take a bit of an issue with this one since some sacramentals clearly were divinely instituted (by Christ), such as the use of objects/things such as the hem of his garment was used to heal the sick (Matthew 9:20) and exorcism - while the full rite was not explicitly defined by Christ, clearly He did exorcise demons (Matthew 8:28-34; Mark 5:1-17).

Perhaps the best way to define is to go to the Latin. A Sacrament, according to the Council of Trent, the Latin phrase is: "ex opere operato." The literal translation being, "the work, worked." In other words, it is agent independent for its efficacy - it works automatically (Byrne, 1990, p. 134). Whereas with a sacramental the Latin phrase is "ex opere operantis," which literally means "from the work of the doer." In short, a Sacrament is not dependent upon the state of the recipient. If the proper matter, form and intent is used through the appropriate minister - the Sacrament happens. On the other hand, a sacramental is based on the act of the doer. Blessing ones self with holy water, for example is efficacious, but not necessarily sprinkling someone else with holy water who is not accepting of it (you can chase those "door knockers" all you want and sprinkle them with holy water - the "effect" in that case is - they get wet).

No Photos During Mass, Per Pope Francis

Pope Francis expresses his displeasure with those who insist upon taking pictures during Mass.


OK, have I ever taken a photo during Mass?  Yes, I have, but I also try to do so discreetly, and not flaunt my cell phone or camera my head.  Pope Francis has a point. So many times when we should see hands held high in praise of our Lord - we see cell phones held high, snapping pictures or taking videos. Like Pope Francis said, "the Mass is not a show, it is to go and meet the passion and resurrection of our Lord."

Now, I can understand if you're in an historic church and you want to get a picture documenting your trip - but we should refrain from doing so during Mass. Take a picture or two before or after Mass, but during Mass - remember why you are there. If you really want a video of the Mass, there are hundreds of places you can get those. No, it likely will not be THE Mass which you participated in, but it will be the Mass in that same church - and the video was taken discreetly and professionally (and likely not as shaky or out of focus as cell phone videos often are!).

Will you go to hell if you take pictures during Mass? No, not likely, at least not for that reason. However, if your actions are distracting and perhaps even causing another to sin (because now they are angry you for the distraction). In that way, you may be a near occasion of sin for others - which may be a sin for yourself - especially if you are knowingly distracting and/or continue after someone makes you aware of the distraction you're causing.

As many of you may know, I'm a Trekkie - so yes, I paid for CBS All Access in order to watch it. After this week I'm likely to do as many others on the CBS Facebook page said they are doing - and cancel my subscription.

Then, at the very end of the show we're confronted with an openly homosexual conversation with two of the actors brushing their teeth together and expressing their concerns and relationship, and while they didn't show anything sexual - they didn't have to. Then in watching the "After Trek" show, the writers stated that we'll be "seeing a lot more of this relationship." Why? Again, completely unnecessary.

Well, even though I threatened not to, I continued through the "first half of Season One."  The show is taking a break until January (2018). While the homosexual agenda was not as rampant in the weeks following, it was not totally absent either. I'm sure some of my critics at this point are thinking me a "homophobe" which is not a very accurate term. The word literally means "man fear" or "fear of man," as the homo prefix means "man" and "phobe" or "phobia" means a "fear" - typically an "irrational fear." I also found it a bit interesting that while doing an online dictionary search for these words in order to document the epistemology, when looking up "homosapien" the epistemology is listed as "homo = man, sapien = wise" however the epistemology is not listed for "homosexual" or "homophobe" or "homophobic," I wonder why? Homosexual literally means "man-sexual" and while this could be considered accurate for male on male sexual acts or desires, it would have nothing to do with female on female sexual acts or desires. But I digress... let me just state that I have no "fear" of "man" - I am a man, both in the sense of specie (mankind) and in the sense of being male. I do not fear myself or others like me. By the same token, I do not "fear" the less than 4 percent of society whom have chosen to act upon homosexual desires - which God sees as an abomination and condemns those who willfully participate in homosexual acts (Lev. 18:22; Rom. 1:26-27; 1 Cor. 6:9-11; 1 Tim. 1:10-11). I will not get into the "born that way" argument at this time, as I believe it is ultimately irrelevant. There is no sin until one acts. It is not "sinful" to have homosexual desires, but it IS sinful to act upon those desires.

While Star Trek Discovery did get "better" as Season 1 progressed, from a Christian perspective, I cannot recommend the series. What "Hollywood" needs to realize is that while we, Christians, are not "afraid" of homosexuality, nor do we deny that there is a homosexual community (less than 4% of the population), what we DON'T want is to have that agenda forced upon us especially so disproportionately by a very vocal minority.

The above being said, Star Trek, in all of its variations, often got (and now gets) into social and social-economic controversies which can stir a healthy discussion of said topics. I am in favor of such a healthy discussion and invite it here and now, so long as we can remain civil and refrain from violence (verbally or otherwise). To that end, I believe Gene Roddenberry would approve too.

I am renaming the CathApol Blog.  Why?  After all these years, why change? Well, simply put - I am "CathApol." This is a nickname I've used for years, starting with my days on IRC (Internet Relay Chat). That being said, while I did start this blog - I am not the only blogger here on the CathApol Blog.

Then, today, being the 24th Sunday after Pentecost (extraordinary rite) with the readings taken from the 6th Sunday after Epiphany (click link here for the readings) I was a bit convicted by the readings and the sermon Father gave. The Epistle readings spoke of humility and the Gospel was about the mustard seed and the woman who took leaven and hid it in three portions of meal (flour) until all was leavened, these being comparisons to the Kingdom of Heaven. Father spoke of St. Therese of Lisieux - whom stated that she could never be like one of the great saints, such as St. Augustine, or Aquinas, they were more like great trees in the forest, whereas she was more like a "little flower," and thusly she became known as St. Therese of Lisieux, The Little Flower. The theme of St. Therese' life is "The Little Way," and not thinking one's self to be great. The point being - BE SMALL. Don't strive for greatness or think yourself bigger or better than someone else - but be like the mustard seed, which is a very small seed - but it becomes a great tree and is considered to be the greatest among the herbs. This and, it only takes a little bit of yeast to leaven a whole loaf of bread. BE SMALL.

So, rather than continue this blog carrying my own nickname - I am renaming it to Qui Locutus - which while some may think of "Locutus of Borg" - a Star Trek reference to when Captain Piccard was assimilated by the Borg and became "The Voice of the Borg" or one who speaks for the Borg, this is NOT the reference I refer to!  I refer to the Credo - where the Holy Ghost "Who has spoken through the prophets," which in Latin is: qui locutus est per prophetas. So, let the Holy Ghost speak through the bloggers and comments here - on the Qui Locutus Blog - and let us be reminded of the "Little Way" of St. Therese of Lisieux. 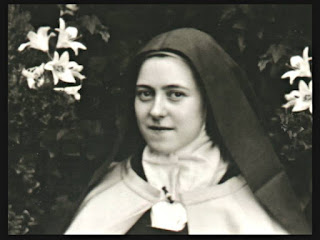