Today I was invited by a co-worker to attend a neighboring parish which this evening was hosting a Catholic Men's Meeting. It sounded interesting, so I accepted and showed up. I got there a few minutes late, and a video of Steve Wood was playing.

Two-Fisted Approach
Perhaps the most catching part of the talk was where Steve spoke of his Protestant brother-in-law pastor who was checking out churches in the area where he just moved to in order to get a feel for how the community was and how each congregation was toward God. He noticed when he visited the Catholic parish that it was mostly women there. Where were the men?

Steve analyzed this and came up with the concept that ever since Vatican II the Church has put more emphasis on the love, forgiveness and mercy side of God - sort of in response to what they saw in Pre-Vatican II days as too much emphasis on the justice and need for penance and repentance side of God - but the men were there in Pre-Vatican II days! Steve asked, "How many of you were on winning sports teams in your youth where the coach came up at the start of the season, and showed you the trophy you could win at the end of the season - and just told you to try hard and you can win this trophy?" No, men need the kick-in-the-pants approach! Winning teams are built by coaches who get in the face of the boys and pushes them every minute to be the best they can be, and be better than they ever thought they could be. Men do not want to be coddled, men need that extra push to get them fired up for God and to BE THERE for God, and not only for God - but for their families.

Your children, especially your sons, will be watching how you go to church. Do you fear God? Do you honor and adore God? Are you even GOING to Mass for your children to see and learn to know, love and serve God in this life so they might be happy with Him in the next? Question 150 of the Baltimore Catechism explains that very question. This is crucial to the up-bringing and healthy development of your family.

That's really the first stage in saving your family - getting your relationship with God on track. You can't expect your family to be saved if you aren't leading by example to save yourself!

The third stage in saving your family is the balanced approach, the "two-fisted" approach, to bring them to Mass every Sunday. If you have the first two stages in order - the third is a breeze. Children do not have an option - they need to be TOLD to be at Mass - but if that's ALL they get, they will resent the hypocrisy of the order. If they SEE how YOU honor and adore God, then they are more apt to do as they see you do. If you are not sincere - nor will they be, and God who knows your heart and their heart, will judge accordingly. You don't want to be among those who cry "Lord, Lord!" only to have Him turn to you and say, "Depart from Me, for I do not know you." (Matthew 7:21-23) In other words, if you're not sincere you could be not only damning your own soul to Hell for eternity - but that of your family as well.

Much of what Steve said in this video can also be seen in his article at http://www.dads.org - the full URL is:

Bishop Olmsted of the Diocese of Phoenix weighs in his opinion on the Notre Dame scandal: 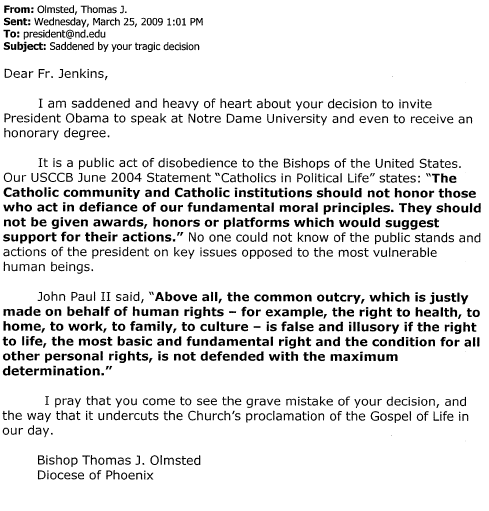 President Obama, who is a staunch supporter of abortion as a woman's right, has been invited to speak at Notre Dame University for this years commencement ceremony AND receive an honorary law doctorate. For the reception of the doctorate, he is expected to wear the traditional Notre Dame robe - which has a prayer to the Blessed Virgin Mary on the chest, will he do this? http://www.cnsnews.com/public/content/article.aspx?RsrcID=46844 What he should do is withdraw his acceptance of the invitation which should NEVER have been offered in the first place. Notre Dame should withdraw the invitation as well. If you are interested in signing the petition asking ND to withdraw the invitation, go here: http://www.notredamescandal.com/ Sign the petition and pass the URL out to all your friends!
Posted by Scott Windsor on April 20, 2009 No comments: