I no longer reside in Tempe, but when we did we frequented Our Lady of Mount Carmel. Periodically I like to check back and see what Fr. Bonavitacola has to say. This week he posted a letter concerning President Obama's speech at Notre Dame, I found it quite interesting and am reposting it here. (And thanks again Fr. Bonavitacola for several years of meeting our pastoral needs while we were temporarily in the neighborhood).

I greatly admire the President’s chutzpah to go into a Catholic University and give a speech about how to be sensitive to the great moral issues of our day! But it really was a case mostly, if you will of preaching to the choir. (Except that the choir acted like this was the first time they heard these things.) The President frequently says one thing but does another. Not an unusual tactic for a politician. All in all the speech was mostly disingenuous and at points deceptive and here’s why:

We’ll start with Stem Cells. The President reminded, actually chided those who oppose ESCR by saying that those who support ESCR do so out of sincere motives, a desire to find cures for sick loved ones. We have never vilified those supporters or assigned nefarious motives. We understand the pain and desperation. That is why we support so strongly alternative research. But the principle holds: the instrumental use of human life no matter how noble the purpose or sincere the desire is always wrong. The ends never justify the means. Once you open the door to human life being destroyed to save another life we will not be able to limit it just to human embryos. The President also said we should support a variety of research methods. Then why when he changed the Policy did he rescind the requirement that the NIH fund alternative research as well as ESCR?

Probably the most perplexing statement was the President’s call for Conscience Clauses for healthcare workers. True, we are hyper sensitive on this issue since we deliver about 20% of the healthcare in the US. Yet he seemed to miss the fact that we already have Conscience Clauses. It was his administration that publicly stated it wants to revoke the one put in place by the last administration and is actively working to do so. Confusing.

To great applause the President stated we need to find ways to reduce the number of abortions. Well we have been doing that since 1973. We helped open Crisis Pregnancy Centers all over the country. We offer women free prenatal and obstetric care. We have places like Maggie’s Place where women can live during pregnancy and with their infants. We offer them help to stand on their own, job training, parenting skills and other social services they need. When asked if he would support Federal funding of Crisis Pregnancy Centers the President said no. Then there is all the pro-life legislation that would help reduce abortions by placing reasonable restrictions on abortion like waiting periods, informed consent, sonograms, parental notification or consent, partial birth abortion, all of which the President has not supported or voted against.

The President also mentioned we need to attack the root causes and the environment that makes abortion an option. Well that too we having been doing for a long time. We pray everyday to end the root causes of abortion. We also work to lift people out of poverty and self-destructive lifestyles. Our Campaign for Human Development helps economic development in poor communities. Then there are all the programs and social services provided by Catholic Charities. We know that, as the President mentioned, the poor turn to abortion more than any other group. We know that one of the surest ways out of poverty is education. We have fought at great cost to keep our schools open in the poorest areas in the US. Yet when we ask for help in the form of vouchers or tax credits again the President says no. He even axed the voucher program for Washington D.C. Then there is Abstinence Based Education, which he is not a fan of and doesn’t support funding for it. The President mentioned adoption: we have offered adoption services for a long time. Now our Agencies are under attack for not offering adoptions to same-sex couples. When we ask for religious exemptions from these requirements we get no help.

If the President wants to reduce the number of abortions then why was it that Sec. Clinton’s recent testimony before Congress included a statement that it is the policy of the US to encourage “reproductive rights” throughout the world? Is she now the abortion ambassador? Why is the US along with a few other nations pushing at the UN to make abortion a requirement for member states or tie it to receiving UN aid, participation in the World Bank and the IMF? Do we have to export this problem to the rest of the world?

The President also said that abortion is a moral and spiritual problem and that women do not make this decision easily. We know that. We have never sought to demonize those who have abortions. We offer programs like Project Rachel and others that offer post abortive women and men ways to find healing and peace. I know first hand how painful and devastating abortion is for women. I was glad though to hear the President say this since so many groups like the APA try to deny that abortion has any harmful effects making it akin to an appendectomy.

Wasn’t it ironic that Norma McCorvy, who as the plaintiff in the Roe v. Wade decision in 1973 was arrested at Notre Dame for being a pro-life demonstrator! The once anonymous Jane Roe who fought for the right to have an abortion is now pro-life.

The President indicated in his speech that we can find common ground. If he is serious about bringing pro-life concerns into the process then he should at least make a good faith gesture such as taking the Freedom of Choice Act off the table. By saying that he would veto FOCA if it comes to his desk he would show that he means more than words.

Doers of the Word

But be ye doers of the word and not hearers only, deceiving your own selves. For if a man be a hearer of the word and not a doer, he shall be compared to a man beholding his own countenance in a glass. For he beheld himself and went his way and presently forgot what manner of man he was. But he that hath looked into the perfect law of liberty and hath continued therein, not becoming a forgetful hearer but a doer of the work: this man shall be blessed in his deed. And if any man think himself to be religious, not bridling his tongue but deceiving his own heart, this man's religion is vain. Religion clean and undefiled before God and the Father is this: to visit the fatherless and widows in their tribulation and to keep one's self unspotted from this world.
(James 1:22-27 DRB)

This was today's Epistle reading (traditional lectionary) and it speaks volumes to what true Christians should be DOING. We are not called merely to hear the Word of God, but to DO the Word of God! What does it say of one who hears but does not do? St. James compares him to one who beholds his countenance in a glass - and forgetting who he WAS did not DO the Word of God. The DOER of the WORK is the one who is BLESSED IN HIS DEED. And what is "religion" according to St. James the Apostle? It is to visit the fatherless and widows in their tribulation - AND to keep one's self unspotted from this world. In short - we must DO things to be DOERS of the Word of God! Those who reject that true Christians are DOERS and preach the false gospel of "sola fide" lose the right to even call themselves Christians for they stand in rejection of the Word of God to support the man-made concept of sola fide which is flatly denied later in James:

Do you see that by works a man is justified, and not by faith only?
(James 2:24 DRB)

This is the only place in Scripture where the words "faith" and "only" are used together - and it is in flat denial of the concept of sola fide!

Another fact adherents to sola fide seem to ignore is the fact that "sola fide" is Latin for "Faith Alone" or "Faith Only," one of the battle cries of the Protestant revolt. Ironically, in ALL the volumes we have from the Early Church Fathers, and for the Western Church who primarily wrote in Latin, the terminology of "sola fide" is absent! In fact, we don't see this terminology used until just about the time of the Protestant revolt and only then used by those who oppose the One, Holy, Catholic and Apostolic Church built by Jesus Christ Himself and founded upon the Apostles.

What is with Catholic universities bowing to pro-abortion President Obama? 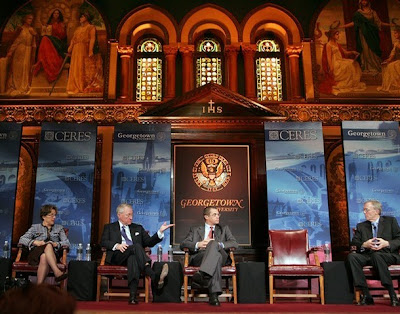 The above picture shows the stage for Georgetown University.

The next picture shows the same set with President Obama speaking... 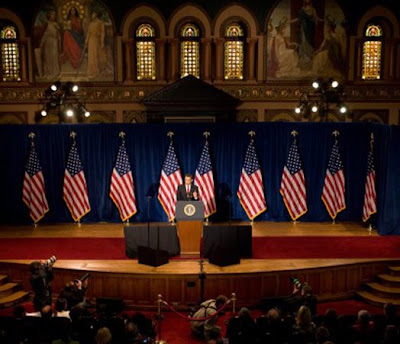 Why was the Obama administration insistent upon the hiding of IHS, the ancient Christian symbol for Jesus Christ? And why would Georgetown compromise for the pro-abortion, pro-embryonic stem cell research president?

Email ThisBlogThis!Share to TwitterShare to FacebookShare to Pinterest
Labels: Obama

Declaration of Bishop Williamson
The Holy Father and my Superior, Bishop Bernard Fellay, have requested that I reconsider the remarks I made on Swedish television four months ago, because their consequences have been so heavy.

Observing these consequences I can truthfully say that I regret having made such remarks, and that if I had known beforehand the full harm and hurt to which they would give rise, especially to the Church, but also to survivors and relatives of victims of injustice under the Third Reich, I would not have made them.

On Swedish television I gave only the opinion (…"I believe“…"I believe“…) of a non-historian, an opinion formed 20 years ago on the basis of evidence then available and rarely expressed in public since. However, the events of recent weeks and the advice of senior members of the Society of St. Pius X have persuaded me of my responsibility for much distress caused. To all souls that took honest scandal from what I said before God I apologize.

As the Holy Father has said, every act of unjust violence against one man hurts all mankind.

Earlier article on the "Trail of Blood" (exposing the lies) has been updated:

http://cathapol.blogspot.com/2006/04/exposing-baptist-trail.html
Posted by Scott Windsor on May 02, 2009 No comments:

Email ThisBlogThis!Share to TwitterShare to FacebookShare to Pinterest
Labels: Trail of Blood

What more really needs to be said?

More bishops joining in the fight, nearly 60 so far!