Not an original work from me but so important that I felt the need to post anyway.

Some issues allow for a diversity of opinion, and Catholics are permitted leeway in endorsing or opposing particular policies.  This is the case with the questions of when to go to war and when to apply the death penalty.  Though the Church urges caution regarding both of these issues, it acknowledges that the state has the right to employ them in some circumstances (CCC 2309, 2267).


Pope Benedict XVI, when he was still Joseph Cardinal Ratzinger, spoke of this in a document dealing with when Catholics may receive Communion:


“Not all moral issues have the same moral weight as abortion and euthanasia.  For example, if a Catholic were to be at odds with the Holy Father on the application of capital punishment or on the decision to wage war, he would not for that reason be considered unworthy to present himself to receive Holy Communion.  While the Church exhorts civil authorities to seek peace, not war, and to exercise discretion and mercy in imposing punishment on criminals, it may still be permissible to take up arms to repel an aggressor or to have recourse to capital punishment.  There may be a legitimate diversity of opinion even among Catholics about waging war and applying the death penalty, but not however with regard to abortion and euthanasia” (WRHC 3).
The same is true of many other issues that are the subject of political debate: the best way to help the poor, to manage the economy, to protect the environment, to handle immigration, and to provide education, health care and retirement security.  Catholics may legitimately take different approaches to these issues while the same cannot be said for euthanasia and abortion, two actions which are always wrong no matter the circumstances.  The protection of innocent life always takes precedence to all other issues.  What good are all other rights if one does not have the right to life?

There will be a bit of a slow-down of articles from me as I have gone back to school for my masters degree.  I'm not going anywhere, I just won't have the time to devote to articles for a while. I hope my fellow bloggers will help fill that void - and you readers - please jump in and add your comments!

God bless you all, and please pray for me too!

Email ThisBlogThis!Share to TwitterShare to FacebookShare to Pinterest
Labels: SMW

Why Pray The Rosary? Pt 2

In Part 2 of this series let us delve into the history of the Holy Rosary.  Most Catholics who know a thing or two will say it started with St. Dominic in the early 13th century, and to a point they would be correct - but the tradition of praying 150 prayers (the full traditional Rosary) and using counting devices goes back much, much further into our Judeo-Christian heritage.  The Psalter of King David goes back to at least the 5th century wherein monks would pray the 150 Psalms.  To keep track, they would use a cord with 150 knots in it, similar to early rosary ropes/beads.  Even prior to Christian use, the Psalms were sung in Jewish ceremonies at the Temple.  Originally, or a very early addition, there were superscriptions to many of the Psalms, indicating the author, the contents and often the melody for that section (Jacobs).

St. Paul of Thebes, Hermit
3rd to 4th Century AD
St. Paul of Thebes was said to carry two bags and 300 pebbles.  As he would say a prayer he would move a pebble from one bag to the other to keep track of his prayers.  St. Clare, the sister of St. Francis of Assisi, also used this method of prayer.  St. Paul was born about 227ad and lived to be 113 years old.  The last 91 years of his life he spent as a hermit, where he also encountered St. Anthony the Great, also an ascetic, who developed a great devotion to the life of St. Paul. (Roman)

The ancient Jewish and biblical use of the prayer shawl or "tzitzit" or "talit" has specific cords tied into knots, similar to rosary cords.  The knots, however, in the tzitzit are not enumerated for prayers - but as a reminder of God's commandments. The total of the cords twists and knots adds up to 613 to represent the Mitzvah, which are the commandments from the Torah beyond the Decalogue (Ten Commandments) most of us know well.  The cords are on the four corners of the prayer shawl, which traditionally was worn all the time, though in modern times it is primarily used ceremonially. In Jewish orthodoxy, the prayer shawl is still worn under ones outer garment. Again, while the knotted cords do not directly refer to prayers - it is on the prayer shawl.

The biblical references to the tzitzit are found in Numbers 15:37-40 and in Deuteronomy 22:12. There is also reference in the New Testament (Luke 8:44) to Jesus wearing such a garment as the woman who suffered from "an issue of blood" for twelve years reached out and touched the tassel (hem or border in some translations) of Jesus' cloak and she was immediately healed.  (Raj, 2013). 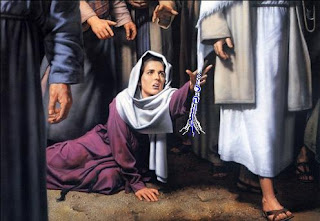 St. Dominic
St. Dominic was preaching the Gospel to the heretics embracing Albigensianism (who believed adultery, fornication and suicide were praiseworthy and did not accept there was a heaven or a hell nor a moral code). He was having little success then one day while in deep prayer and penance the Blessed Virgin appeared to him and stated: "Wonder not that you have obtained so little fruit by your labors, you have spent them on barren soil, not yet watered with the dew of Divine grace. When God willed to renew the face of the earth, He began by sending down on it the fertilizing rain of the Angelic Salutation. Therefore preach my Psalter composed of 150 Angelic Salutations and 15 Our Fathers, and you will obtain an abundant harvest" (Feeney). From this St. Dominic produced the fifteen mysteries of the Rosary - each mystery dealing with a significant part of Jesus' life. As he began preaching the Rosary, converts from the Albigenses began and caught fire throughout the land.

As one can clearly see, the use of beads and/or knotted cords is certainly not anti-Christian and is rooted in ancient Jewish tradition. It is a tradition we may proudly embrace.

Raj, T. V. Antony, September 10, 2013, Are The Tallit and Tzitzit of Jews Equivalent to Prayer Beads Used in Other Religions? https://tvaraj.com/2013/09/10/are-the-tallit-and-tzitzit-of-the-jews-equivalent-to-prayer-beads-used-in-other-religions/

Roman, Dr. Alexander, The Historical Development of the Orthodox Prayer Rope and Its Importance to Our Spiritual Life http://stillstoneandmoss.com/page.php?page=PrayerRopesArticleByAlexanderRoman and also http://www.rosaryworkshop.com/HISTORY-AlexRoman.html

Why Pray The Rosary? Pt 1

The Concluding Prayer
O GOD, Whose only begotten Son, by His life, death and resurrection has purchased for us the rewards of eternal life, grant, we beseech Thee, by meditating upon these mysteries of the Most Holy Rosary of the Blessed Virgin Mary, that we may imitate what they contain and obtain what they promise, through the same Christ our Lord. Amen.

Last Sunday, in the Extraordinary Rite, was Holy Rosary Sunday.  The actual feast day is October 7th, but when that date does not fall on a Sunday, it is celebrated on the Sunday before.  In our sermon, Father taught on several points, but one which struck me - which I had not really thought much about, was the Concluding Prayer (above), in particular the last part... "by meditating upon these mysteries... imitate what they contain... and obtain what they promise.

To Meditate
Meditating on the mysteries is more than just thinking about them as you pray each decade, but going into deeper thought about them.  The mysteries are various stages in the life of Jesus Christ.  We meditate on the joyful parts, the sorrowful and the glorious parts.  In the modern version we have added stages which bear light on the life of Christ in the Luminous Mysteries.  To meditate, we take it beyond just the 15 minutes spent in prayer of the Rosary itself.

To Imitate
One cannot really imitate the life of Christ without first meditating on it.  By imitating Christ, we bring Him into us and allow us to become more like Him.  The more we meditate upon Him and His life, the more we can and hopefully will, imitate Him.

To Obtain
Through the Holy Rosary we hope to obtain our share in the Resurrection, that is, eternal life in and with Jesus Christ.  If we imitate His life, and He lives in and through us, then we will be resurrected with Him in Heaven as co-heirs with Him. 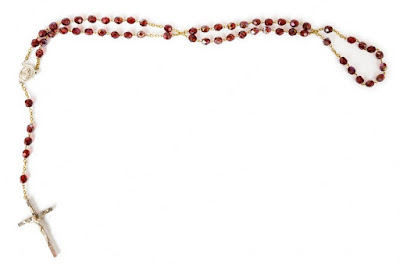 Aids and instruction for praying the Holy Rosary may be found here:
http://cathapol.blogspot.com/p/blog-page.html
Posted by CathApol on October 03, 2016 No comments: