BUT!  Then you hear or read of those who proclaim that St. Patrick was never officially declared a Saint by the Catholic Church - and most of us then say, um, WHAT?! While it is true that St. Patrick was not declared a Saint, in the same manner, most other Saints have been so declared - one must look at the REASON his canonization was different. The fact is, in the first millennium the formal canonization process had not been fully developed. However, to proclaim he was never officially canonized is simply NOT TRUE! The fact of the matter is, in ancient times, starting about 787 A.D., a new church had to have a relic from a Saint before it could be consecrated.

In 1177, a knight named John de Courcy built a new monastery and he, with Bishop Malachy, applied to Pope Urban III for permission to have the remains of Sts. Patrick, Brigid, and Columcille moved to the new monastery. An investigation was conducted and a Solemn Translation (elevato corporis) was approved. Pope Urban sent Cardinal Vivian with his official commission for the verification of the sanctity of the persons (Patrick, Brigid, and Columcille), followed by an all-night vigil prior to moving the remains. For the day, this WAS an official declaration of sainthood by and through the Catholic Church (McCormick, 2011).

The process of declaring one a saint has changed many, many times throughout the ages, most recently in 1983 and 1997 (McCormick, 2011). So, while St. Patrick's official canonization was not according to the modern means - he was most definitely recognized as a Saint of the Catholic Church and BY the Catholic Church in 1177 A.D. 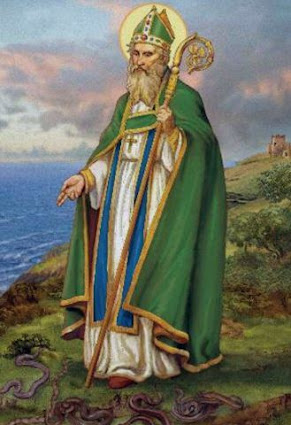