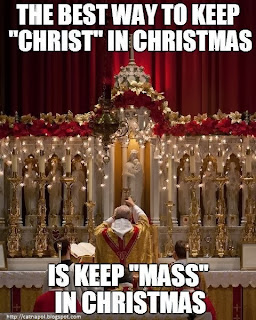 Well it's HERE! It's the Christ Mass Season! Happy Holy Days! Christ Mass started with Midnight Mass on Christ Mass morning, which was last Sunday. The season lasts until the Epiphany, January 6th. This is the time of year to remember the greatest Gift we've ever received - our Redeemer and Savior was born in Bethlehem about 2000 years ago.

Let us pray for peace in the world, let us pray for peace and healing in Christ's Church - and those who have separated themselves from her. May they come to know that it is through this One Church which Jesus intended us to come to Him - for He desires that we are ONE, just as He and the Father are One.

The Reason for the Season! 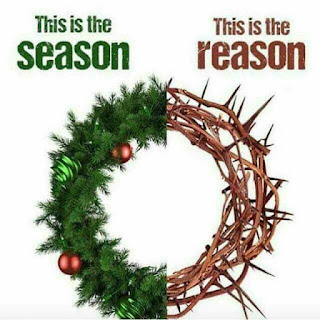 Let us all pause a moment to remember the "Reason for the Season."

Advent is the time of year we wait in eager anticipation of the Christ Mass, the Christmas Season, but ultimately the reason of His coming was to go through the Passion, Death, and Resurrection of Holy Week - the last week of Lent and the beginning of Eastertide. The REAL reason for the season is our salvation - which is celebrated through Easter/Eastertide. From the perspective that every Sunday is truly a "little Easter," then the Advent and Christmastide seasons have meaning all year round.

ChristMass begins with Midnight Mass, of course at midnight during the first minutes of December 25th. This is truly when we should BEGIN the celebration of ChristMass!

This season minimally lasts for twelve days - till the Epiphany, on January 6th. It is these twelve days that we should be celebrating the birth of our Lord. We say "minimally" because Christmastide really lasts at least through Candlemas (February 2nd) and in some ancient traditions, it lasts all the way through Epiphany and ends with the start of the Septuagesima Season.

Why do we celebrate in late December and early January though?


Early Christians sought to calculate the date of Christ's birth based on the idea that Old Testament prophets died either on an anniversary of their birth or of their conception. They reasoned that Jesus died on an anniversary of his conception, so the date of his birth was nine months after the date of Good Friday, either December 25 or January 6. Thus, rather than the date of Christmas being appropriated from pagans by Christians, the opposite is held to have occurred. [See Duchesne (1902) and Talley (1986).]
(Source).

So, based on these calculations - it seems understandable why the ChristMass Season lasts from December 25th through January 6th or even February 2nd. This also coincides with the time frame many Orthodox celebrate ChristMass - being January 7th. Their reason for doing so on that date is because they did not recognize "the reforms of the Gregorian calendar nor the Revised Julian calendar" (ibid).

Advent is nearly over - and we eagerly await the wee hours of the morning of December 25th, and the First Mass of the day - the Christ Mass. (Noting also, that's why it has the name "Christmas" - in remembrance of the "Christ Mass").

A blessed Advent to all, and I hope your ChristMass is wonderful too!

Feeling the Love of a Beating Heart

OK, this is just plain creepy, but then again, the listing of what Frederick had at the castle church at Wittenberg is just as creepy, just not high-tech. There is something so very non-Christian about this kind of thing you wonder how anyone with a scintilla of respect for biblical teaching could possibly find it attractive.

Hmmm, this caught my eye so I looked at the article White refers to:

WARSAW (AFP) - A Polish Dominican monk has asked the Rome clinic that treated John Paul II to give him recordings of the late pope's heartbeat, which he hopes to play to ardent Catholics at Christmas midnight mass.

For years, our hearts beat for him. Today, we want to symbolically listen to his heart," Brother Jan Gora was quoted by the Glos Wielkopolski daily as saying.

"We have taken the first steps" to obtaining recordings of the heartbeat of John Paul II, who died on April 2 in his private apartment at the Vatican, after being hospitalised at the Gemelli Clinic, he said.

If Brother Gora obtains the recording, the late Polish-born pope's heartbeat will be played back during the Agnus Dei at midnight mass in Lednica, in southwestern Poland.

Gemelli Clinic spokesperson Nicola Cerbino told Polish reporters in Rome that he was not sure the clinic even possessed such a recording.

He also said that the ultimate decision on whether to hand over any such recording, if it existed, would fall to the family of the deceased.

So what's so "non-Christian" about this? How is this contrary to "biblical teaching?" White's statements are in complete non-sequitor. The sound of a human heartbeat is quite a moving thing to hear. I remember being there with my wife throughout all her pregnancies, and the first time you hear that baby's heartbeat is one of the more memorable experiences I've ever had. Likewise, to hear the beating of Pope John Paul II's heart would remind us of his humanity, of his heartfelt love in Christlike fashion for all of humanity. This is not Edgar Alan Poe stuff, unless that's where your mind is.

White Has It Wrong Again

So goes the heading on White's website. He accuses His Holiness, Benedict XVI, of "inclusivism," and alleges he's in conflict with Pope Pius IX's "Syllabus of Errors." Well, let's see. White opens with:

That low rumbling sound you've been hearing in the east is the sound of Pope Piux IX spinning in his grave (which, oddly, if the listing I saw at the Vatican is accurate, is not actually at St. Peter's) as the Roman leadership has continued moving ever farther away from his Syllabus of Errors and headlong into embracing pure inclusivism. We had noted more than once John Paul II's statements in this regard. On November 30th, Benedict XVI likewise seemed to give his approval to the viewpoint. From the official Vatican webpage we read,

In elucidating the psalm, the Pope also referred to a meditation on the subject by St. Augustine in which, he said, "the great Father of the Church introduces a surprising note: he knows that even among the inhabitants of Babylon there are people committed to peace and goodness, though without sharing the biblical faith. In the end, then, God will lead those people to the heavenly Jerusalem, rewarding them for their pure consciences."

If we look carefully at what White is quoting from the Vatican webpage, Pope Benedict is referring to something St. Augustine said! White's gripe here is not with Pope Benedict, but with St. Augustine! St. Augustine is the one saying people will be rewarded, outside the biblical faith, for their pure consciences. White in his haste to attack Catholicism seems to have overlooked the facts here, and is really attacking one of his favorite sources!