It is with great sadness I write about the loss of a friend and associate from the Arizona Gymnastics Community. Kim Bird was a great inspiration to countless gymnasts, fellow coaches and even gymnasts and coaches he was competing against - there really wasn't an "against" - we were always competing "with" him.

Rest in peace my friend.

Feast of Christ the King - Last Sunday after Pentecost

It is also called “The Last
Sunday in Ordinal Time.”

Being the culmination of the Church
year – it is on this day we celebrate the Feast of Christ the
King.

We have all been through a lot
throughout the past year, and we close the year with the celebration
of our King and Lord, Jesus Christ. Next Sunday is the beginning of
our New Year – and as such it is the First Sunday in Advent. I
will have more to follow on the subject of Advent, but for now, let
us rejoice in our King! Sing praises to His Holy Name and bow down
and worship the One who is worthy of our praise and adoration.

The liturgical readings for the Feast
of Christ the King:

Worthy
are you, our Lord and God,
to receive glory and honor and
power,
for you created all things,
and by your will they
existed and were created.

Worthy
are you, O Lord,
to take the scroll and to open its seals,
for
you were slain,
and by your blood you ransomed men for God
from
every tribe and tongue and people and nation.

You
have made us a kingdom and priests to our God,
and we shall reign
on earth.

Worthy
is the Lamb who was slain,
to receive power and riches
and
wisdom and might,
and honor and glory and blessing.

Collect
Almighty
and merciful God, who breaks the power of evil and makes all things
new in your Son Jesus Christ, the King of the universe: May all in
heaven and earth acclaim your glory and never cease to praise you.
We
ask this through our Lord Jesus Christ, your Son, Who lives and
reigns with you and the Holy Spirit, one God, for ever and ever.
Amen.

First
Reading: Ezekiel 34:11-12; 15-17
For thus says the Lord GOD:
Behold, I, I myself will search for my sheep, and will seek them out.
As a shepherd seeks out his flock when some of his sheep have been
scattered abroad, so will I seek out my sheep; and I will rescue them
from all places where they have been scattered on a day of clouds and
thick darkness.

Second
Reading: 1 Corinthians 15:20-26,28
But in fact Christ has been
raised from the dead, the first fruits of those who have fallen
asleep. For as by a man came death, by a man has come also the
resurrection of the dead. For as in Adam all die, so also in Christ
shall all be made alive. But each in his own order: Christ the first
fruits, then at His coming those who belong to Christ. Then comes the
end, when He delivers the kingdom to God the Father after destroying
every rule and every authority and power. For He must reign until He
has put all His enemies under His feet. The last enemy to be
destroyed is death.

Year
B
First Reading: Daniel 7:13-14
I saw in the night visions, and
behold, with the clouds of heaven there came one like a Son of Man,
and He came to the Ancient of Days and was presented before Him. And
to Him was given dominion and glory and kingdom, that all peoples,
nations, and languages should serve Him; His dominion is an
everlasting dominion, which shall not pass away, and His kingdom one
that shall not be destroyed.

Second Reading: Revelation
1:5-8
Jesus Christ is the faithful witness, the first-born of the
dead, and the ruler of kings on earth. To him who loves us and has
freed us from our sins by his blood and made us a kingdom, priests to
his God and Father, to him be glory and dominion for ever and ever.
Amen. Behold, he is coming with the clouds, and every eye will see
him, every one who pierced him; and all tribes of the earth will wail
on account of him. Even so. Amen.

"I am the Alpha and
the Omega," says the Lord God, who is and who was and who is to
come, the Almighty.

Gospel: John 18:33-37
Pilate entered
the praetorium again and called Jesus, and said to Him, "Are you
the King of the Jews?" Jesus answered, "Do you say this of
your own accord, or did others say it to you about Me?" Pilate
answered, "Am I a Jew? Your own nation and the chief priests
have handed you over to me; what have you done?" Jesus answered,
"My kingship is not of this world; if my kingship were of this
world, my servants would fight, that I might not be handed over to
the Jews; but my kingship is not from the world." Pilate said to
him, "So you are a king?" Jesus answered, "You say
that I am a king. For this I was born, and for this I have come into
the world, to bear witness to the truth. Every one who is of the
truth hears my voice."

Year C
First Reading: 2 Samuel
5:1-3
In those days, all the tribes of Israel came to David at
Hebron, and said, "Behold, we are your bone and flesh. In times
past, when Saul was king over us, it was you that led out and brought
in Israel; and the LORD said to you, 'You shall be shepherd of my
people Israel, and you shall be prince over Israel.'" So all the
elders of Israel came to the king at Hebron; and King David made a
covenant with them at Hebron before the LORD, and they anointed David
king over Israel.

Second Reading: Colossians 1:12-20
Giving
thanks to the Father, who has qualified us to share in the
inheritance of the saints in light. He has delivered us from the
dominion of darkness and transferred us to the kingdom of his beloved
Son, in whom we have redemption, the forgiveness of sins.

He
is the image of the invisible God, the first-born of all creation;
for in him all things were created, in heaven and on earth, visible
and invisible, whether thrones or dominions or principalities or
authorities--all things were created through him and for him. He is
before all things, and in him all things hold together. He is the
head of the body, the church; he is the beginning, the first-born
from the dead, that in everything he might be pre-eminent. For in him
all the fulness of God was pleased to dwell, and through him to
reconcile to himself all things, whether on earth or in heaven,
making peace by the blood of his cross.

Gospel: Luke
23:35-43
The rulers scoffed at him, saying, "He saved others;
let Him save Himself, if He is the Christ of God, His Chosen One!"
The soldiers also mocked Him, coming up and offering Him vinegar, and
saying, "If you are the King of the Jews, save yourself!"
There was also an inscription over Him, "This is the King of the
Jews."
One of the criminals who were hanged railed at Him,
saying, "Are you not the Christ? Save Yourself and us!" But
the other rebuked him, saying, "Do you not fear God, since you
are under the same sentence of condemnation? And we indeed justly;
for we are receiving the due reward of our deeds; but this Man has
done nothing wrong." And he said, "Jesus, remember me when
You come into Your kingdom." And He said to him, "Truly, I
say to you, today you will be with Me in Paradise."

Posted by Scott Windsor on November 24, 2007 No comments:

The Truth of Santa Claus 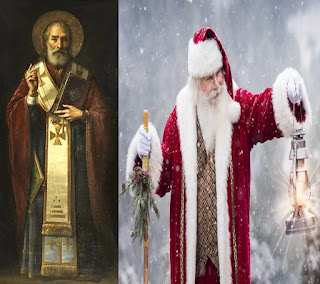 The following is a collection of articles demonstrating the Truth of Santa Claus - or more properly, St. Nicholas. St. Nicholas was really a person, a giving person who loved children and whose spirit lives on in the giving of gifts at Christmas time. Far too often we are reminded of the over commercialization of Christmas - a point we must whole-heartedly agree with - but we must be careful not to "throw out the baby with the bathwater." Many get a bit over-zealous in their desire to decommercialize Christmas, and they throw out Santa Claus - but the giving Saint and Bishop of Myra truly exemplifies the giving spirit of the Christmas holiday, recalling the gifts given to the Christchild by the Three Wisemen. Let us remember the true spirit of Christmas and the ultimate Gift given all of us, a Savior who is Christ the Lord. He came to us that first Christmas morning, a Free Gift to all who will accept it and accept Him as their Messiah, and Redeemer. This spirit of giving lived on in the life of St. Nicholas and lives on throughout the world in the many names of St. Nicholas today.

Let us also remember the name of the holiday, it is the Christ Mass, or Christmas, that we are celebrating. The Gift Christ gave the world is remembered this day, and the ultimate Sacrifice that He would give us all, His Life and Resurrection, is remembered throughout the world and throughout the history of Christendom in the Christ Mass. I hope you join me, where ever you are in the world, and take some time out of your busy Holy Day (holiday) and go to Mass this day, or Divine Liturgy as it is called by our Eastern brethren. I'd also like to call to your minds that the weeks prior to Christ Mass are NOT the Christmas Season! This is Advent! Advent is a time of penance and reflection on the past year. What habits have we overcome this year? What acts of charity have we done? What more can we do? Advent is the season of preparation and remembrance of the coming of the Messiah, the Savior of the World. It is a time of joy, but the joy is in anticipation. Too many folks "tear down Christmas" on December 26, but what they don't seem to realize is that is the first day of Christmas! The Twelve Days of Christmas are those 12 days starting the day after the Christ Mass and ends on Epiphany, January 6th, traditionally recognized as the day the Wisemen visited Jesus. In some Christmas traditions, a gift is given on each of the 12 days, also remembering the spirit of giving of the Christmas Season, (the gifts of the Wisemen, THE Gift of Jesus Himself, and the spirit of giving from St. Nicholas or Santa Claus). Let Christmas live on through January 6th. If we, as Christians, are remembering the Holy Day (holiday) then let's really remember it, all of it! I wish you all a blessed Advent season, and likewise, a blessed ChristMass season.

He is named in the preparation of the Byzantine Divine Liturgy (Mass). http://www.catholic.org/saints/saint.php?saint_id=371

Posted by Scott Windsor on November 24, 2007 No comments: