Today is the Second Day of Christmas! (December 26) 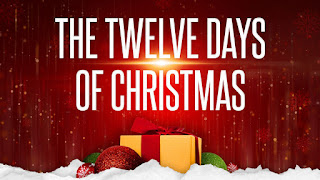 The Twelve Days of Christmas are the days, starting with the Christ Mass on December 25th, through February 5th. February 6th is the Feast of the Epiphany. February 6th is traditionally celebrated as Three Kings Day - or the day the Three Wisemen visited the Holy Family in Bethlehem. Does this end Christmastide?  Not quite!  Read below!

Today is also the Feast of St. Stephen, the First Christian Martyr. Stephen's death is recorded in Acts 7:54-60. He died with his last words asking God not to hold his persecutors responsible (one of whom was Saul, who would become St. Paul).

As we remember St. Stephen, he being the first one killed for his faith in Jesus Christ, we must not forget the Holy Innocents, who were actually the first martyrs for Christ - though they had no idea who Jesus Christ was. The scriptural accounting of the Holy Innocents is Matthew 2:16–18 when King Herod was attempting to have the Christchild killed. St. Joseph was given a vision of the intentions of King Herod and fled to Egypt with the Blessed Mother and Jesus. The feast day for the Holy Innocents is December 28th - and is also known as Childermas.

Remember!  Christmastide actually lasts well into the Season of Epiphany! Christmastide officially ends with Candlemas on February 2nd - which is the Feast of the Presentation of Jesus at the Temple. In the traditional (extraordinary) lectionary, this is the last time in the liturgical year that the Nativity is mentioned - and thus ends the Christmas Season.
Posted by CathApol on December 26, 2019