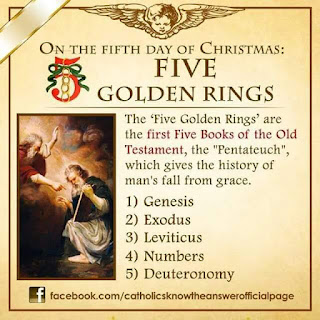 This year found us at the ordinary rite of the Mass, and this Sunday after Christmas is celebrated as Holy Family Sunday. 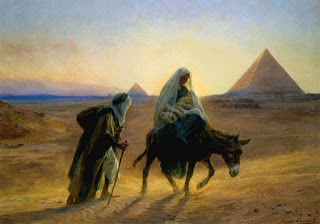 2For the Lord honored the father above the children, and he confirmed the right of the mother over her sons. 3Whoever honors his father atones for sins, 4and whoever glorifies his mother is like one who lays up treasure. 5Whoever honors his father will be gladdened by his own children, and when he prays he will be heard. 6Whoever glorifies his father will have long life, and whoever obeys the Lord will refresh his mother; 7he will serve his parents as his masters. 12O son, help your father in his old age, and do not grieve him as long as he lives; 13even if he is lacking in understanding, show forbearance; in all your strength do not despise him. 14For kindness to a father will not be forgotten, and against your sins it will be credited to you;

12Put on then, as God's chosen ones, holy and beloved, compassion, kindness, lowliness, meekness, and patience, 13forbearing one another and, if one has a complaint against another, forgiving each other; as the Lord has forgiven you, so you also must forgive. 14And above all these put on love, which binds everything together in perfect harmony. 15And let the peace of Christ rule in your hearts, to which indeed you were called in the one body. And be thankful. 16Let the word of Christ dwell in you richly, teach and admonish one another in all wisdom, and sing psalms and hymns and spiritual songs with thankfulness in your hearts to God. 17And whatever you do, in word or deed, do everything in the name of the Lord Jesus, giving thanks to God the Father through him. 18Wives, be subject to your husbands, as is fitting in the Lord. 19Husbands, love your wives, and do not be harsh with them. 20Children, obey your parents in everything, for this pleases the Lord. 21Fathers, do not provoke your children, lest they become discouraged.

In the extraordinary rite, this is the Sunday within the Octave of Christmas and the readings for today are:

Gal. 4:1-7
Brethren: As long as the heir is a child, he differeth nothing from a servant, though he be lord of all, but is under tutors and governors until the time appointed by the father. So we also, when we were children, were serving under the elements of the world. But when the fullness of the time was come, God sent his Son, made of a woman, made under the law: that he might redeem them who were under the law: that we might receive the adoption of sons. And because you are sons, God hath sent the Spirit of his Son into your hearts, crying: "Abba, Father". Therefore, now he is not a servant, but a son. And if a son, an heir also through God.

At that time, And his father and mother were wondering at those things which were spoken concerning him. And Simeon blessed them and said to Mary his mother: "Behold this child is set for the fall and for the resurrection of many in Israel and for a sign which shall be contradicted. And thy own soul a sword shall pierce, that, out of many hearts thoughts may be revealed."
And there was one Anna, a prophetess, the daughter of Phanuel, of the tribe of Aser. She was far advanced in years and had lived with her husband seven years from her virginity. And she was a widow until fourscore and four years: who departed not from the temple, by fastings and prayers serving night and day. Now she, at the same hour, coming in, confessed to the Lord: and spoke of him to all that looked for the redemption of Israel.
And after they had performed all things according to the law of the Lord, they returned into Galilee, to their city Nazareth. And the child grew and waxed strong, full of wisdom: and the grace of God was in him. 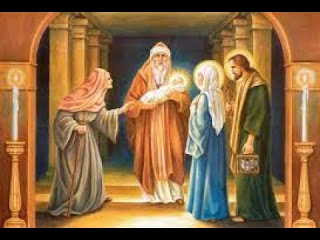 Tonight is also the last night of Hanukkah!  The eighth candle is lit and Hanukkah ends with sunset tomorrow (Monday, December 22 this year). 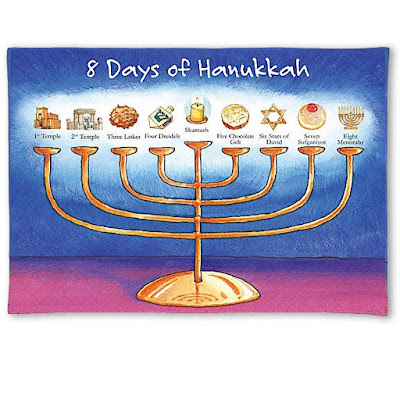