The Fourth Day of Christmas - The Holy Innocents

Childermas - Feast of the Holy Innocents
December 28th is the commemoration of the Holy Innocents, the story of whom is told in Matthew 2 (the whole chapter, but specifically Matt 2:13-18). King Herod wanted to destroy the Christchild for he feared the Messiah as the new King of Israel would take the kingdom by force. Thus, after the Magi had informed him of the arrival of this new king, Herod ordered the massacre of all male children age 2 and under in Bethlehem. St. Joseph had a vision of the impending massacre and was told to take the Blessed Mother and Jesus to Egypt and to stay there until Herod died. 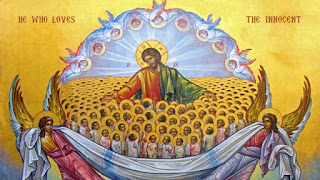 Often just played instrumentally, has words which also tell the story of the Holy Innocents:


Lullay thou little tiny child,
By, by lully lullay.
O sisters, too how may we do,
For to preserve this day;
This poor youngling for whom we sing,
By by lully lullay.
Herod the king, in his raging
Charged he hath this day;
His men of might in his own sight
All children young to slay.
Then woe is me, poor child for thee
And ever mourn and day;
For thy parting, no say nor sing
By by lully lullay

Reminder: Christmastide lasts until February 2nd!
Continue to remember the season!
Posted by CathApol on December 28, 2019