The Fifth Sunday of Lent is also called Passion Sunday or Judica Sunday, from the first word in the Introit – which in English is "Judge me…" (again, from the Extraordinary Rite of the Mass).

This passage speaks of the Old Testament Law and sacrifice and how those sacrifices did bring on the cleansing of the flesh. However imperfectly, the Sacrifice of Christ brings this cleansing perfectly. It is through our participation in the unbloody Sacrifice of the Mass that we cooperate with His Grace and receive His Body and Blood under the appearance of bread and wine.

Jesus reveals Himself to the Jews (especially in the verses which immediately proceed this Gospel), and He tells them that they do not hear Him because they do not belong to God (v. 47). They do not hear Him and look to kill Him – because they are not of God. Jesus reaffirms that their father, Abraham rejoiced at the thought of seeing Him – and he (Abraham) saw that day and was glad (v. 56). Jesus closes with, "Verily I say to you before Abraham was born, I Am!" (v. 58). The Jews then began to pick up stones to kill Him, but He hid Himself and slipped away (v. 59).

Passion Sunday is also the start of Passiontide, the last 2 weeks before Easter - many churches and homes cover all crucifixes and other religious art with purple veils. 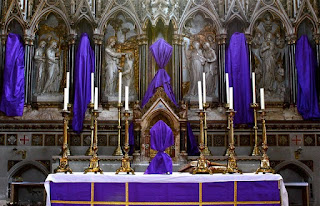 ﻿"Be strong and courageous. Do not fear or be in dread of them, for it is the Lord your God who goes with you. He will not leave you or forsake you." -Deuteronomy 31:6

These are the words of Moses to Israel as he was passing his authority on to Joshua to lead them across the Jordan and into the Promised Land. Those whom they should not fear are the current occupants of the land. A similar story to what we have in the Gospel on the Fifth Sunday of Lent, as the Jews – the current occupants of the Holy Land were not following God, if they had been, they would have seen that the Messiah had indeed come – and instead of accepting and following Him, they looked to kill Him.