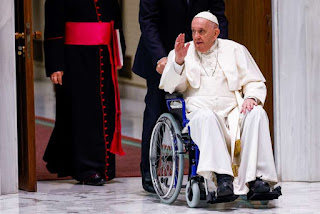 About a year and a half ago I posted speculation of Pope Francis resigning - granted, and openly stated that the claims were "rumors" and a bit questionable and I took a "wait and see" approach. Well, while still not officially announced - Pope Francis' health has been getting more concerning as of late, and according to a TMZ article, he cancelled a planned visit to Africa and also just called in the cardinals he recently appointed (and one could speculate on specifics here, but let's not).

That said, other agencies are saying the resignation of Pope Francis "seems unlikely." Another says, "no one expects the Pope to die or resign anytime soon." Or, "resignation rumors are 'cheap soap opera'," The Boston Pilot says.

Now, the fact that Pope Francis is most often seen in wheelchair can be explained by the fact that he is experiencing severe knee pain, unlike when Pope John Paul II succumbed to a wheelchair as Parkinson's took more and more of a role.

For now - and again - this observer will continue with the "wait-and-see" approach.