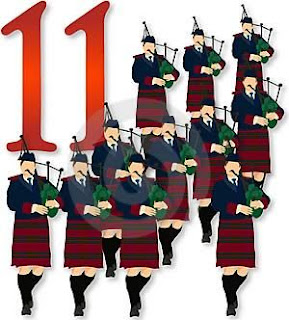 A couple meanings could be behind this according to legend. During the 16th through 19th centuries, it was illegal for Catholics to practice their faith in England - so the story goes (may not be true) that the faithful Catholics developed coded meaning in the song, the Twelve Days of Christmas, to publicly sing of their faith without drawing attention to it. One possible meaning is the 11 represents 11,000 - or a lot - of martyrs for the Catholic Faith in England. Another and more popular belief is that the 11 represents the 11 Apostles who remained faithful to Christ through the Crucifixion and Resurrection.
I say "legend" because there is no real hard evidence prior to the 1990s where this "legend" seems to have begun. Certainly, the song is from the 16th-17th century, but that there are coded meaings behind each verse - well, again, there is just no evidence for this prior to several email chains from the 1990s. That said, I see nothing wrong with attributing these meanings to the verses, but we should be clear about the origins of these meanings.
Catholic Saints for January 4th:

Email ThisBlogThis!Share to TwitterShare to FacebookShare to Pinterest
Labels: 12 Days of Christmas, SMW