Snopes says it is "false," but doesn't really lay out a strong case for such a definitive judgment.  While they do raise some cause for concern or doubt, nothing in the Snopes article conclusively disproves the alleged miraculous nature of the spiral staircase at Lorreto, NM. 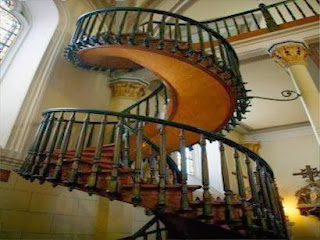 As the story goes, when the chapel was built it was left with no access to the choir loft.  The nuns were going to just use a ladder to access the loft, but seeking a better solution they did a novena (nine days of prayers) to St. Joseph.  On the ninth day, a man on a donkey with a toolbox showed up looking for work.  He designed and built the spiral staircase, alone, and without the use of nails OR a central support!  The railing was not part of the original staircase.  When the carpenter finished, he left without receiving payment.  It remains a mystery as to who the craftsman was - some surmise it was St. Joseph himself who answered the prayers of the nuns - others say it may have been Jesus who would have acquired the trade from St. Joseph as He was growing up, and prior to His public ministry which didn't start until He was 30.

Again, even though Snopes says this is "false," there really isn't ANY evidence to disprove the miraculous explanation to this staircase.  Yes, they explain some of the technical aspects, but not who this carpenter was and the fact he did it alone and the matter of no visible means of support (the side support they mention does not give vertical support, only horizontal stability).  The "honest" assessment from Snopes SHOULD be that it is "inconclusive" to prove one way or the other.