Third Sunday of Lent - Scripture of the Week 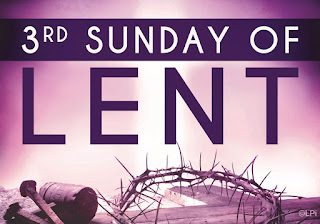 For the Third Week of Lent:

The Epistle this Sunday (Extraordinary Rite) is taken from Ephesians 5:1-9 wherein we are reminded to be followers of God and to not stray into sins of fornication. covetousness. obscenity, foolish talking and all uncleaness for those who do will not inherit Heaven. You were in darkness but are now in the Light of the Lord.

The Gospel this Sunday (Extraordinary Rite) is from Luke 11:14-28 - In this passage, Jesus casts out a devil from a person who was dumb - and immediately the person began to speak. Some who witnessed this claimed he cast out demons by Beelzebub, the Prince of Devils. Jesus responds that a kingdom divided against itself shall be desolated. He also warned that when a demon is cast out and wanders around looking for a new home, if finding none it returns to the host in which it once resided. Seeing the former host is now clean and inviting, it goes out and brings back seven other spirits to inhabit - making the later state is worse than the first. This is a warning to be on one's guard against evil spirits who will want to come into those who have been delivered to the Lord. It is also evidence against those who preach OSAS (once saved, always saved) for clearly one who was delivered from evil has been "saved" but there is danger of not only falling away, but to be in an even worse situation than their previous state. 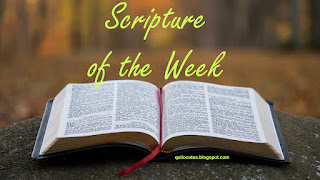 From my professor this week:

"Let us hold unswervingly to the hope we profess, for he who promised is faithful." - Hebrews 10:23

I respond: Not only does this fit well with this Sunday's Epistle (Extraordinary Rite) to remain faithful and also with the Gospel to be diligent after being delivered to Christ, but also reminds me of our motto as apologists from 1 Peter 3:15 - to always (unswervingly) be ready to give an answer for the hope that is within us!

Here's to persevering in Lenten devotion and penance.