Laetare Sunday - Scripture of the Week

Scripture of the Week – Week 4 of Lent

This Sunday is Laetare Sunday and is the second (and final) day of the liturgical year in which the color of the vestments is rose (not “pink”). One of the ways a priest told me how to remember this is “Jesus didn’t pink from the dead on Easter Sunday, He rose from the dead.” 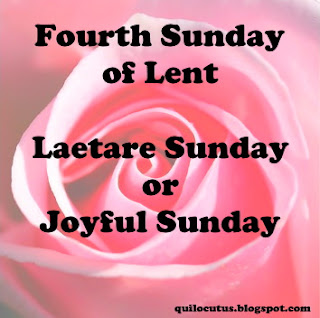 Scripture this week from my professor:

"May the God of hope fill you with all joy and peace in believing, so that by the power of the Holy Spirit you may abound in hope." - Romans 15:13

When I first read this it made me think of the Introibo (in - tro - eebo) in the Latin Mass:

Introibo ad altare Dei – which translated is “I will go in to the altar of God.”

And more precisely the next line:

Ad Deum qui laetificat juventutem meum – which translated is “To God, which maketh my youth joyful.”

And how appropriate! Lautare Sunday is “Joyful Sunday” – as you can see by the similarities in “laetare” and “laetificat” – both with the root meaning of “joyful.”

Joyful or Laetare Sunday is a time during the season of Lent to meditate upon the joyfulness of the coming Easter. Rejoice (be joyful) in the Lord! This is similar to the other day in the liturgical year which utilizes rose vestments – which is Gaudate Sunday and also, in Latin, has the meaning of “Joyful Sunday” during the season of Advent.

Anyway, this Sunday wear something rose-colored!