Well, for the Orthodox this year Cheesefare Sunday or Forgiveness Sunday is not until March 1st, but in the Eastern Rites of the Catholic Church, since their Lent aligns with the Latin Church, TODAY is Cheesefare Sunday!

Cheesefare Sunday is the culmination of Cheesefare Week, which is the last week before Lent begins and for those who celebrate Great Lent (Eastern Rite Catholics and Eastern Orthodox), this is the last day to partake in dairy products, meat, and eggs until the Pascha - Easter Sunday. The Monday after Cheesefare Sunday then begins Lent for Eastern Catholics.

Do not then, confront your neighbor in judgment - rather do so in a spirit of forgiveness. Especially during Lent - let your confrontations be in the spirit of love and charity - and not in judgment of one another. This sentiment is not just for Lent! 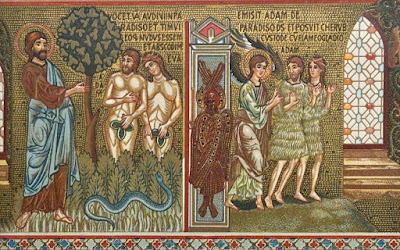 Adam and Eve Cast Out of the Garden

One of the themes for Forgiveness Sunday is the casting our of Eden of Adam and Eve, but the focus, rather than on their sin, is upon their reconciliation to and through Jesus Christ.
Posted by Scott Windsor on February 23, 2020