This is, perhaps, the dividing line between Catholics and (especially Calvinist) Protestants when it comes to Justification.  What do these terms really mean?  Let us begin first with definitions coming from each side as they define the terms then proceed with examination of the arguments.

CCC 1999: The grace of Christ is the gratuitous gift that God makes to us of his own life, infused by the Holy Spirit into our soul to heal it of sin and to sanctify it. It is the sanctifying or deifying grace received in Baptism. It is in us the source of the work of sanctification.

It is really as simple as that - grace is infused into the soul.  The soul is healed.

Lest we should stumble at the very threshold (this we should do were we to begin the discussion without knowing what the subject is), let us first explain the meaning of the expressions, To be justified in the sight of God, to be Justified by faith or by works. A man is said to be justified in the sight of God when in the judgment of God he is deemed righteous, and is accepted on account of his righteousness; 2038 for as iniquity is abominable to God, so neither can the sinner find grace in his sight, so far as he is and so long as he is regarded as a sinner. Hence, wherever sin is, there also are the wrath and vengeance of God. He, on the other hand, is justified who is regarded not as a sinner, but as righteous, and as such stands acquitted at the judgment-seat of God, where all sinners are condemned. As an innocent man, when charged before an impartial judge, who decides according to his innocence, is said to be justified by the judge, as a man is said to be justified by God when, removed from the catalogue of sinners, he has God as the witness and assertor of his righteousness. In the same manner, a man will be said to be justified by works, if in his life there can be found a purity and holiness which merits an attestation of righteousness at the throne of God, or if by the perfection of his works he can answer and satisfy the divine justice. On the contrary, a man will be justified by faith when, excluded from the righteousness of works, he by faith lays hold of the righteousness of Christ, and clothed in it appears in the sight of God not as a sinner, but as righteous. Thus we simply interpret justification, as the acceptance with which God receives us into his favor as if we were righteous; and we say that this justification consists in the forgiveness of sins and the imputation of the righteousness of Christ. (John Calvin, Institutes of Christian Religion Book III, Chapter 11.2)

They admit that the sinner, freely delivered from condemnation, obtains justification, and that by forgiveness of sins; but under the term justification they comprehend the renovation by which the Spirit forms us anew to the obedience of the Law; and in describing the righteousness of the regenerate man, maintain that being once reconciled to God by means of Christ, he is afterwards deemed righteous by his good works, and is accepted in consideration of them. The Lord, on the contrary, declares, that he imputed Abraham’s faith for righteousness (Rom. 4:3), not at the time when he was still a worshipper of idols, but after he had been many years distinguished for holiness. Abraham had long served God with a pure heart, and performed that obedience of the Law which a mortal man is able to perform: yet his righteousness still consisted in faith. Hence we infer, according to the reasoning of Paul, that it was not of works. In like manners when the prophet says, “The just shall live by his faith,” (Hab. 2:4), he is not speaking of the wicked and profane, whom the Lord justifies by converting them to the faith: his discourse is directed to believers, and life is promised to them by faith. Paul also removes every doubt, when in confirmation of this sentiment he quotes the words of David, “Blessed is he whose transgression is forgiven, whose sin is covered 2081,” (Ps. 32:1).

I answer, that the grace which they call accepting, is nothing else than the free goodness with which the Father embraces us in Christ when he clothes us with the innocence of Christ, and accepts it as ours, so that in consideration of it he regards us as holy, pure, and innocent. For the righteousness of Christ (as it alone is perfect, so it alone can stand the scrutiny of God) must appear in court for us, and as a surety represent us judicially. Provided with this righteousness, we constantly obtain the remission of sins through faith. Our imperfection and impurity, covered with this purity, are not imputed but are as it were buried, so as not to come under judgment until the hour arrive when the old man being destroyed, and plainly extinguished in us, the divine goodness shall receive us into beatific peace with the new Adam, there to await the day of the Lord, on which, being clothed with incorruptible bodies, we shall be translated to the glory of the heavenly kingdom. (John Calvin, Institutes of the Christian Religion, Book III, Chapter, XIV, Nos. 11 and 12).

In short, righteousness covers over sin - but does not remove it.  The righteousness only makes the sin "covered" and "buried" so that we do not come under judgement.  It is not so different from the paraphrase of Luther in the statement of "snow covered dung."  Below is some research I have previously done on this alleged statement from Luther:


He may not have said those exact words, though he has been allegedly quoted as saying such, not merely by Catholics, but even by other Lutherans. The paraphrase may have come from Martin Luther’s Sermon on Our Blessed Hope (St. Louis Ed. IX: 930-957):

"We see grain sowed in the ground. Reason now asks: What happens to the grain in winter that has been sowed in the ground? Is it not a dead, moldy, decayed thing, covered with frost and snow? But in its own time it grows from that dead, moldy, decayed grain into a beautiful green stalk, which flourishes like a forest and produces a full, fat ear on which there are 20, 30, 40 kernels, and thereby finds life where only death existed earlier. Thus God has done with heaven, earth, sun and moon, and does every year with the grain in the field. He calls to that which is nothing that it should become something and does this contrary to all reason. Can He not also do something which serves to glorify the children of God, even though it is contrary to all reason?"

We do get closer to the saying here:

In that same document Luther adds:

"All the justified could glory in their works, if they would attribute glory to God with respect to themselves. In this manner they would not be dung, but ornaments" (Luther's Works, Vol. 34, page 178). http://cathapol.blogspot.com/2006/10/luthers-snow-covered-dunghill.html

The bottom line here is that Luther and Calvin are not far apart on this issue as both see justification as a "covering" of ones sin.

The contrast then is the Catholic position is one of healing and restoration of the soul to a condition of righteousness whereas the Protestant position doesn't cure or change anything - it simply covers it up - leaving the sinner with his sin (thus impure and cannot enter Heaven, according to Revelation 21:27).  Now this, alone, would not be so bad IF the Protestant position accepted Purgatory, wherein any stain of remaining sin in those who have been judged "righteous" or "saved" can be "purged," but they also reject Purgatory!  Thus the doctrine of imputation, as THEY define it, leaves them condemned to Hell!  The Catholic position of infusion of righteousness washes away sin and restores the soul to a state of grace which enables the person to be "saved" even if some stain of (venial) sin might remain, that too can be "cured" in Purgatory.

Now the Protestant will argue, "How can one who has been imputed righteousness and judged righteous be condemned to Hell?"  And again, it is not the Catholic position that such a person would be condemned.  Those with any stain of sin remaining after they have been judged while still being "saved" will have their works tested.  If there are good works, they will endure the testing and the person will be rewarded; if there are bad works (sin) then these will be "burned up" and this person, though already judged as "saved" will "suffer loss."  This is fundamentally clear in St. Paul's words to the Corinthians: 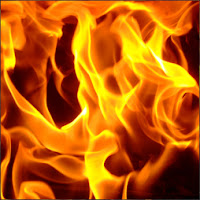 13 Every man's work shall be manifest; for the day of the Lord shall declare it, because it shall be revealed in fire; and the fire shall try every man's work, of what sort it is.

This is as clear of a testimony to Purgatory and describes exactly what will take place there!  I repeat again, this passage speaks to men who have already been deemed to be "saved" and their works are being tested by fire and those which "burn" will cause this saved person to "suffer loss."  But I digress.

Back to the point, in the Protestant position of imputation the person is "clothed" or "covered" in righteousness, but like a snow covered dunghill, the sin remains.  A clothing or covering does not change or remove that which is clothed or covered.  In the Catholic position righteousness is infused into the soul, the soul is changed.

Infused:  Gasoline which is infused with ethenol, while still gasoline is now a cleaner burning gasoline - it has been changed.  A coach can "infuse the team with confidence" (source).

Imputed: To assign fault, blame or credit.  "An example of to impute is find an oil leak as the cause for a car breaking down" (source).

A Matter of Semantics?

I believe that when push comes to shove, the Protestant will acknowledge that the person is changed by this imputation, but if they do - then what they are really doing is accepting the Catholic position of infusion.  It would seem that they must ultimately accept the Catholic position here, even if they continue to call it "imputed righteousness," for as explained earlier, such an imputation does not change anything, it only covers it up.  In the Lord's Day (the Judgment) when all our works are tested - the "snow" will be melted away and expose that which it covered.  Any sin which remains will be a cause of suffering for the person (again, who has already been judged to be "saved" at this point).  So, when we get down to the fundamentals here, are not the Protestants still affirming the Catholic position?  If so, why is this a major point of contention between us?

I plea to our Separated Brethren, why not come home?