Jesus, speaking to His Apostles, tells them that as the Father sent Him, He also sends them. And the very next line is, "Receive the Holy Ghost... whose sins YOU forgive, they ARE forgiven them..." THIS is why His Apostles, our first bishops, have the authority to forgive sins AND since Jesus sent them to forgive sins - they too must pass on this authority to their successors - our bishops are those successors!  THIS is why our priests, IF they have THIS authority from a valid bishop in succession from the Apostles, can forgive sins at the Sacrament of Reconciliation (aka, the Sacrament of Penance). Those sins THEY do not forgive (are retained) are NOT forgiven ("they are retained"). One who is not of this valid succession has NO AUTHORITY to forgive sins.

THIS is His Divine Mercy, which is what this Sunday is also referred to in the modern lectionary.

The Sunday After Easter is traditionally Low Sunday (Extraordinary Rite).

Some highlights from the Extraordinary Rite:

Epistle: 1 John 5:4-10 - "For whatsoever is born of God, overcometh the world: and this is the victory which overcometh the world, our faith. Who is he that overcometh the world, but he that believeth that Jesus is the Son of God? This is he that came by water and blood, Jesus Christ: not by water only, but by water and blood. And it is the Spirit which testifieth, that Christ is the truth.  And there are three who give testimony in heaven, the Father, the Word, and the Holy Ghost. And these three are one. And there are three that give testimony on earth: the spirit, and the water, and the blood: and these three are one. If we receive the testimony of men, the testimony of God is greater. For this is the testimony of God, which is greater, because he hath testified of his Son. He that believeth in the Son of God, hath the testimony of God in himself. He that believeth not the Son, maketh him a liar: because he believeth not in the testimony which God hath testified of his Son."
The Greater Alleluia: Alleluia, alleluia. On the day of My resurrection, saith the Lord, I will go before you into Galilee. Alleluia. (John 20:26) After eight days, the doors being shut, Jesus stood in the midst of His disciples, and said: Peace be with you. Alleluia.
Gospel: (which is the same for the Ordinary Rite too on this day) John 20:19-31 - "Now when it was late that same day, the first of the week, and the doors were shut, where the disciples were gathered together, for fear of the Jews, Jesus came and stood in the midst, and said to them: Peace be to you. And when he had said this, he shewed them his hands and his side. The disciples therefore were glad, when they saw the Lord. 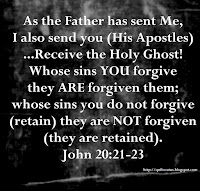 He said therefore to them again: Peace be to you. As the Father hath sent me, I also send you. When he had said this, he breathed on them; and he said to them: Receive ye the Holy Ghost. Whose sins you shall forgive, they are forgiven them; and whose sins you shall retain, they are retained. Now Thomas, one of the twelve, who is called Didymus, was not with them when Jesus came. The other disciples therefore said to him: We have seen the Lord. But he said to them: Except I shall see in his hands the print of the nails, and put my finger into the place of the nails, and put my hand into his side, I will not believe. And after eight days again his disciples were within, and Thomas with them. Jesus cometh, the doors being shut, and stood in the midst, and said: Peace be to you. Then he saith to Thomas: Put in thy finger hither, and see my hands; and bring hither thy hand, and put it into my side; and be not faithless, but believing. Thomas answered, and said to him: My Lord, and my God. 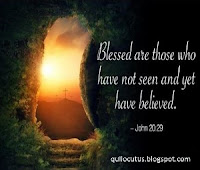 Jesus saith to him: Because thou hast seen me, Thomas, thou hast believed: blessed are they that have not seen, and have believed. Many other signs also did Jesus in the sight of his disciples, which are not written in this book. But these are written, that you may believe that Jesus is the Christ, the Son of God: and that believing, you may have life in his name."

Offertory: Matthew 28:2, 5-6 - "An angel of the Lord descended from heaven, and coming, rolled back the stone, and sat upon it. And the angel answering, said to the women: Fear not you; for I know that you seek Jesus who was crucified. He is not here, for he is risen, as he said. Come, and see the place where the Lord was laid."