An Apologist View of the Assumption

The Feast of the Assumption of the Blessed Virgin Mary was last week, August 15th. In the Eastern Rites this is celebrated as the Dormition of the Theotokos.


St. John Damascene (d. 749) also recorded an interesting story concerning the Assumption: "St. Juvenal, Bishop of Jerusalem, at the Council of Chalcedon (451), made known to the Emperor Marcian and Pulcheria, who wished to possess the body of the Mother of God, that Mary died in the presence of all the Apostles, but that her tomb, when opened upon the request of St. Thomas, was found empty; wherefrom the Apostles concluded that the body was taken up to heaven." [Qtd. by Fr. Saunders in The Assumption of Mary at: http://www.ewtn.com/faith/teachings/maryc3c.htm]

The Feast is established in the Eastern Church by the Byzantine Emperor Mauritius (582-602)on August 15th and remains celebrated on this date in both Eastern and Western (Latin) traditions. 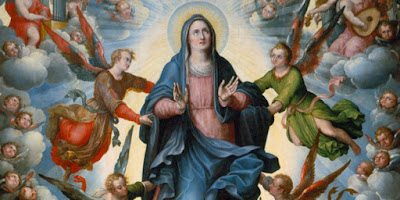 I selected this picture because it shows our Blessed Lady as an older woman. So many of the other pieces of art we have show the Blessed Virgin as a young lady, even at the time of her assumption into Heaven.

Is The Assumption of the Blessed Virgin Mary Contrary to Scripture?

While it is true, Scripture makes no mention of the Assumption, it is not something contrary to Scripture either. Enoch walked with God and was taken by God (Gen. 5:24). Elijah was taken up by a whirlwind as he and Elisha were talking and separated by a chariot of fire (1 Kings 2:11; 1 Macc. 2:58). Elijah's presence in Heaven is made evident as well by his appearance at the Transfiguration - and also at this event was Moses, indicating at least a third person was bodily in Heaven (Matt. 17:3). That being said, Scripture itself does imply she's already there! In Rev. 12:1 we hear of this "woman clothed in the sun" and "crown on her head with twelve stars" - again implying she is already there AND has been crowned, as we refer to her, as Queen of Heaven. We're also sure this passage is talking about the Blessed Virgin Mary because it also speaks of her as giving birth to a Son, whom the Devil sought to destroy, but that Son ascended into Heaven where He sits upon His throne.

Even the staunchest of "Bible-believering Christians" must accept that bodily assumption into Heaven is not something contrary to Scripture.

Some may point to John 3:13 and Jesus' own words where He says "And no man hath ascended into heaven, but he that descended from heaven, the Son of man who is in heaven." Does Jesus then contradict what is clearly recorded in Gen. 5:24 and 2 Kings 2:11? By no means! Enoch and Elijah were "taken" to Heaven, they did not ascend by their own accord - and neither did the Blessed Virgin! The only Man who has ascended into Heaven by His own will/accord - is the Son of Man, Jesus Christ.

Another Extraordinary Event During the Ordinal (Counting) Season

And yes, during this time of the liturgical year, in modern times it is referred to as "Ordinary Time," but this is yet another example of the extra-ordinary being celebrated. It is my ongoing mission and plea that we stop referring to this period in the liturgical calendar as "ordinary" and go back to what it was called previously - and that is "Ordinal Time." Yes, both "ordinal" and "ordinary" are from the same root and CAN both mean a period of counting - the more popular use of "ordinary" takes on a lesser meaning of something more general, or humdrum, or run-of-the-mill (see Thesaurus on "ordinary" for more).

Does The Church Have the Authority

Does the Church have the authority to declare such a feast day and dogmatically define such a teaching? Clearly, the answer here is YES! In Matthew 16:18-19 the authority to bind or loose on Earth and in Heaven of whatsoever he chooses is given to our first pope, St. Peter - and in Matthew 18:18 that same authority is given to the Apostles, our first bishops, as a group. So, while St. Peter and/or his successors, can declare such a teaching as dogma (and this did happen in 1950 when Pope Pius XII defined this very teaching as dogma in Munificentissimus Deus. I would add, the ONLY part of that document which is absolutely infallible is the definition itself, and that is:


that the Immaculate Mother of God, the ever Virgin Mary, having completed the course of her earthly life, was assumed body and soul into heavenly glory.

Bottom line here is, before getting too far into a debate on the Assumption itself, it is best to establish the authority of the Catholic Church - which is truly the more/most fundamental difference between Catholics and those who protest against Catholicism.

If so, please click on one of the like/share buttons below and help spread the word! Also be sure to click on the "Follow" link in the right sidebar of this blog to follow this blog and receive updates.
Posted by CathApol on August 19, 2018