Do We Wish Peace on All?

Do we wish peace on all mankind, even those who would kill and/or otherwise harm us?  We've all seen the "Christmas cards" with the phrase, "Peace on earth, goodwill to men." 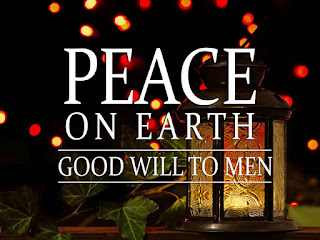 But, is that what Scripture REALLY says?  Let's take a look, shall we?  The phrase is taken from Luke 2:14:
Douay-Rheims Bible
Glory to God in the highest; and on earth peace to men of good will.

The mis-translation comes to us largely from the Protestant King James Version and a couple other (early) Protestant versions.
King James Bible
Glory to God in the highest, and on earth peace, good will toward men.

Virtually ALL modern translations, both Catholic and Protestant, agree with the Douay-Rheims - that this peace or goodwill is not intended for ALL mankind, only to those of goodwill - or those in whom God is pleased.  In fact, it is not a wish of "goodwill to men" at all, but a wish of PEACE to those who are OF goodwill.

Also, another friendly reminder as this is being posted on December 23rd, it's NOT CHRISTMAS YET!  Christmas officially begins with the first Mass of Christmas, which traditionally is Midnight Mass of Christmas Eve/Christmas Morning.  Until THAT Mass, it's still the Season of Advent!

So, MY wish for those of you reading this - if you are of goodwill, I wish for you a blessed Advent being mindful not only of the Incarnation of Christ and His birth, but also the Second Coming of Christ - which we also emphasize through the readings of Advent.

The Season of Christmas begins with the First Mass of Christmas and does not end until the Feast of Epiphany (January 6th) or more traditionally at Candlemas (February 2nd).  Leave your Christmas lights and decorations up and on at least until January 6th!  For the more dedicated, until February 2nd!  When people ask you why the decorations are still up and/or lit, you have an opportunity to  share with them that Christmas isn't over yet.