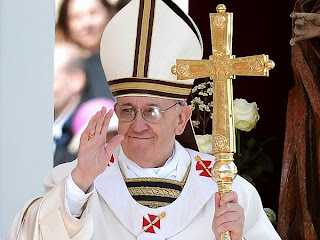 The full text of the interview is copyrighted, except for quoting portions.  For the purpose of this article I will be quoting only the section which has been taken out of context by many "reporters" who are trying to make it sound like the Pope is changing her teaching on homosexuality, marriage and contraception.  So, first that quote and then my comments:


So, first off let us be clear - the Pope is NOT changing the Church's teaching on homosexuality, marriage and contraception!  Allow me to take the "snippet approach" to show a more contextual presentation of this portion of the interview:


I see the church as a field hospital after battle. It is useless to ask a seriously injured person if he has high cholesterol and about the level of his blood sugars! You have to heal his wounds. Then we can talk about everything else. Heal the wounds, heal the wounds.... And you have to start from the ground up.

So, in short, he's NOT saying we change our teaching, but rather - look at the whole person first, heal wounds first - "Then we can talk about everything else."  He still wants to talk about these things, he just doesn't want the initial focus to be on peripheral issues - let's get them "into the hospital" first, then work on these things.  Next snippet:


The church sometimes has locked itself up in small things, in small-minded rules.

The "small things," as Pope Francis calls them, are these individual sins.  Read on...


The most important thing is the first proclamation: Jesus Christ has saved you.

Note, the "most important thing" is the matter of salvation.  Jesus Christ came to save you.  He has done all that is necessary for your salvation - we need to put more emphasis on saving the sinner instead of focusing on the sin in "the first proclamation."  Again, this is not avoiding the 800 pound gorilla in the room, it's just saying "first things, first."  In speaking about those who minister he says:


The first reform must be the attitude. The ministers of the Gospel must be people who can warm the hearts of the people, who walk through the dark night with them, who know how to dialogue and to descend themselves into their people’s night, into the darkness, but without getting lost.

The emphasis is on the attitude of how we approach the sinner.  Do you just pronounce judgment upon them and then expect them to follow us?  No!  Pope Francis is telling us to be like Jesus!  Get out there in the trenches with the sinners - but be prepared.  Know how to dialog and descend into their "dark night" without getting lost in it yourself.


“We need to proclaim the Gospel on every street corner,” the pope says, “preaching the good news of the kingdom and healing, even with our preaching, every kind of disease and wound. In Buenos Aires I used to receive letters from homosexual persons who are ‘socially wounded’ because they tell me that they feel like the church has always condemned them. But the church does not want to do this. During the return flight from Rio de Janeiro I said that if a homosexual person is of good will and is in search of God, I am no one to judge. By saying this, I said what the catechism says. Religion has the right to express its opinion in the service of the people, but God in creation has set us free: it is not possible to interfere spiritually in the life of a person.

This part I have some concern with, but really only with the last part of the last sentence.  It is our responsibility to "interfere spiritually in the life of a person" especially when the spirituality of that person is taking them on a path to hell.  We don't need to present it in such a way that we're threatening them with hell (though sometimes that too is a good method!) but, as Pope Francis said, confront them first with the Gospel message that Jesus came to redeem them.


We cannot insist only on issues related to abortion, gay marriage and the use of contraceptive methods. This is not possible.


We have to find a new balance; otherwise even the moral edifice of the church is likely to fall like a house of cards, losing the freshness and fragrance of the Gospel. The proposal of the Gospel must be more simple, profound, radiant.

Note, he is still emphasizing the Gospel of salvation FIRST and that is the important thing to stress - but not ONLY the Gospel, but what?  A "new balance."  You cannot JUST preach the happy, feel good message anymore than you should just preach fire and brimstone - but preach with a BALANCED approach.  This is made clear when he continues with:


It is from this proposition that the moral consequences then flow.

Pope Francis is not ignoring the 800 pound gorilla, he's just saying that's not the only animal in the room.  Once someone has accepted the proposition of salvation it is THEN that they can consider the moral consequences of these other aspects which may be in their lives.  Again, get them into the "Field Hospital" first, then work on the tangential (but still important) issues.  Pope Francis drives the point home again when he says:

He's not saying we are not to talk about the moral matters, but what he IS saying is that if we begin with "the first proclamation" then after some good catechesis we can draw an even more moral consequence - just put the "proclamation of salvation" at the forefront.   To focus and/or put undo emphasis upon these other matters does not speak to the heart of Christ.  THAT is the message which Pope Francis is putting out.  He's not changing Church teaching and he's not saying we don't speak about these moral issues (upon which, as he stated, "the Church teaching is clear").

So, what most of you are seeing in the media, especially the liberal media which seems to have a homosexual agenda to push, are out of context snippets to make it appear Pope Francis is, as at least one site calls him, "a flaming liberal."  An in context look at what he REALLY said exposes that he's not backing down one iota from the Church's moral position on homosexuality, the sanctity of marriage and the illicitness of contraception - he's only saying that was aren't to make these items the sole focus of our ministries or apostolates.