On August 4, 2013, the feast day of St. John Vianney, did HE make an appearance to help save a 19 year old who was trapped inside her vehicle?  Trapped for over an hour, the report is, as her vital signs were beginning to fail she asked for someone to pray with her - and mysteriously a priest appeared and prayed with her!  He is described as having a thick accent and a police artist rendering of the priest has some striking resemblance to St. John Vianney, the Cure' of Ars (see below): 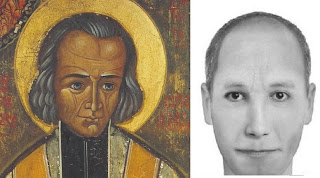 Fire chief Reed said: “We’re all local people from four different towns. We’ve only got one Catholic church out of three towns and it wasn’t their priest. I think it’s a miracle. I would say whether it was an angel that was sent to us in the form of a priest or a priest that became our angel, I don’t know. Either way, I’m good with it.”
Katie Lentz’s mom, Carla Churchill Lentz, said emergency workers have told her there is no way her daughter should have lived inside such a mangled car. Of the priest, she said, “I do believe he certainly could have been an angel dressed in priest’s attire because the Bible tells us there are angels among us.”
New York Daily News reports it this way: 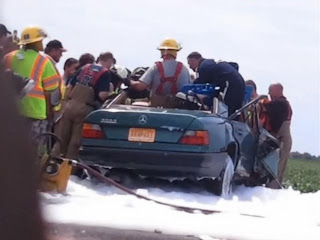 A 19-year-old woman was miraculously saved from a wrecked car on a Missouri highway — after a mystery priest suddenly appeared to pray with the victim and bless the rescue operation.
But once the woman was cut free, the holy man vanished from the cornfield-lined roadway.
“As a first responder, you don’t know what you’re going to run into,” New London Fire Chief Raymond Reed told KHQA-TV. “In this particular case, it is my feeling that it was nothing more than sheer faith and nothing short of a miracle.”

Firefighters had been struggling for nearly an hour to get the teen, Katie Lentz, out of her crumpled Mercedes-Benz after a drunken driver crossed the middle line of the two-lane highway and struck her head-on about 9 a.m. Sunday, officials told the news station.

The smoke-eaters desperately tried to reach Lentz — who was pinned between her seat and the steering wheel — but the heavy steel of the car kept dulling the blades of their cutting tools, Reed said.

“It was a very well-built car,” Reed said. “And when you compact materials like that one, they become even stronger because you’re cutting through multiple things instead of one layer.”
Medical workers had just warned the crew that Lentz’s condition was failing fast, when the teen asked if everyone nearby would pray out loud with her.
Suddenly, a man clad in black with a white collar appeared at the scene.

“He came up and approached the patient, and offered a prayer,” Reed said. “It was a Catholic priest who had anointing oil with him. A sense of calmness came over her, and it did us as well.”
Reed said he couldn’t make out everything that was said between the injured woman and the priest.

“But myself and another firefighter, we very plainly heard that we should remain calm, that our tools would now work and that we would get her out of that vehicle,” he said.
As soon as the blessing was given firefighters with the Hannibal Fire Department arrived with fresh tools, which were able to extricate Lentz from the mangled car.

The injured teen was air lifted from the scene and taken to Blessing Hospital, where condition was later upgraded to serious after undergoing several surgeries.
“Both of her legs are very damaged,” Lentz’s friend, Amanda Wiseman, told KHQA—TV. “Her wrist is broken, several broken ribs, so she’s had a lot of broken bones to deal with.”
Once Lentz was safely aboard the helicopter, the fatigued emergency workers turned to thank the priest — but the man had vanished from the scene.

Not a single bystander or civilian vehicle was on the Center, Mo., thoroughfare, a quarter-mile of which had been closed for first responders to work after the wreck.

“Where did this guy come from?” asked another Lentz pal, Travis Wiseman. “We’re looking for the priest and so far, no one has seen him. Whether it was a priest as an angel or an actual angel, he was an angel to all those and to Katie.”

Police later arrested Aaron Smith, 26, who was booked on a string of charges that include DWI, assault and failure to drive on the right half of the roadway.
The injured teen’s mother told the news station that her daughter has always turned to prayer when facing possible defeat.
“All along the way, her foremost request is for people to pray and to pray out loud,” she said. “We would like nothing more than to carry that message forward for her."


Miracle, coincidence - or Godincidence?  You decide!  Feel free to add your comments here too.
Posted by CathApol on August 11, 2013