Thoughts from this weekend's feasts...

Well, Saturday was the Feast of Our Lady of Snow. We celebrate this day because of a miracle of snow, which fell on this day in Rome. Keep in mind, this is the middle of summer in Rome! What preceeded the snow was a vision, shared by a Roman patrician, John and his wife (who were without heirs), and Pope Liberius also had the same vision. Backtracking a little, John and his wife, having no heirs, promised their fortunes in honor of the Virgin Mary. The vision was that the Virgin Mary would show them by a sign where to build a church in her honor. On that evening of August 5th it snowed on the summit of Esquiline Hill. In obedience to the vision, a basilica was built there with the funds from John and his wife.

Snow is often used in Scripture as a reference to purity. Sunday was the Feast of the Transfiguration of our Lord - and His clothes were made "white as snow." Seeing as how this feast day of Our Lord fell on a Sunday this year, the vestments at the altar were white (instead of green, as the Sundays After Pentecost normally are), white like snow.

Another interesting point our priest brought out in the sermon today was that the Apostles, upon seeing Moses and Elijah there with Jesus immediately wanted to erect three tents (tabernacles), one for Jesus, one for Moses and one for Elijah - all equal tabernacles. This was not to be! For though Moses represents the Law, he is not the epitome of the Law, Jesus is. Though Elijah represents the prophets, he is not the epitome of the prophets, Jesus is. After the Apostles had offered to erect these tents, God spoke and refocused their attention stating - "This is My Beloved Son, in Whom I am well pleased, listen to HIM." At the sound of the voice of the Father, the Apostles dropped to the ground in fear and humble submission. After the Father spoke, they arose - and found only Jesus there with them.
Posted by Scott Windsor on August 06, 2006 No comments: Links to this post 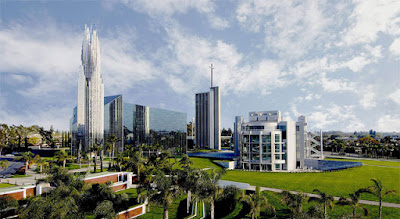